I'm a bull rider who used to be scared of riding bulls. My dad started me riding when I was very young, and when I got old enough, I had to ride bulls. I was a little excited. When I got to the Ehler's ranch, I got really scared and had butterflies. My bull was a real chute fighter, which got me even more scared. My dad said I had to ride or I would never get to go to another rodeo, which would be really bad since I loved rodeos, especially the bull riding.

When it was my turn, I wanted to ride, but just couldn't get myself to do it. It took me 30 seconds to think about it. I thought about how much fun I had riding horses, steers, calves and sheep. So I jumped on, took my wrap, sat on my rope and called for the gate. The bull bucked out straight and high. I rode him for eight seconds. That was the best feeling in the world. My dad was really proud of me, and so was the rest of my family.

I had a cousin ride his first bull that day too. His older brother was the state junior bull-riding champ, someone we all looked up to. The next day we began a full schedule of bull riding. At first we didn't do too well, but at the last five rodeos we placed high and got into the finals. I had received first place on my first spinning bull which gave me a lot of confidence going into the finals.

But on the second day of the finals, I had a bad accident. I broke my jaw and had to be in the hospital for five days. I was told it happens even to the best, and that is why I still ride today. It is the biggest rush when I make it. 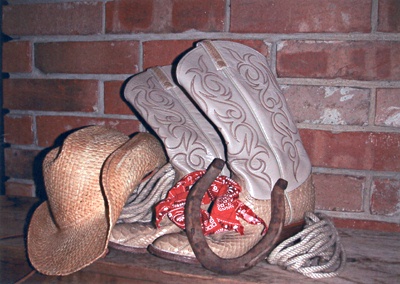