Athletes For Sure | Teen Ink

Athletes For Sure MAG

If you imagine cheerleaders as ditzy girls jumping around on the sidelines, you have no idea what the sport is all about. Most people don’t know how hard it is until they lift and throw a girl into the air who weighs just as much as they do! It takes strength, flexibility, stamina, conditioning, endurance, and responsibility to be a great cheerleader.

Cheerleading was founded in the 1870s by Johnny Cambell, a student at the University of Minnesota. During a football game he stood up in the stands and started directing people to cheer, “Rah! Rah! Rah!” Since then cheerleading has spread across the world.

Today, about three million American teenagers participate in cheerleading. There are even 40 colleges that offer scholarships for cheerleaders. Despite its popularity, judgments are made about cheerleaders every day. Lots of people assume that they are all just silly girls who are not athletic or intelligent enough to play another sport. Yet, according to American Sports Dating Inc., 83% of cheerleaders hold a B or higher average, 62% are involved in another sport, and 83% are leaders in school organizations.

Cheerleading, like any other sport, comes with responsibilities, respect for coaches and teammates, and requires adequate grades to make the team. It’s not just unbelievable strength but also effort and hard work that’s necessary to make a good squad. Cheerleaders spend endless hours working to perfect their stunts and cheers before a competition.

So, next time you see a cheerleader, don’t be so quick to judge and instead think about how hard it is to throw a girl up into the air and catch her. You may think she is as light as a feather but reality check - she eats just as much as you! Treat them as athletes. That’s what they are. 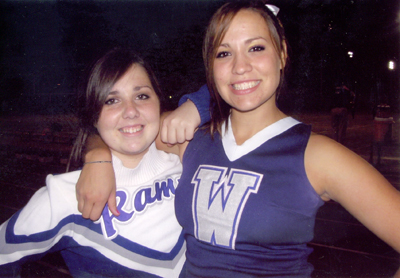