I was standing against the railing at Yankee Stadium in the right field corner. Batting practice was on, and players were stretching out. The giant scoreboard was playing scenes of Yankeeography. It was sunny and the fresh cut grass smelled great. There was a smell of beer and hot dogs, so there was no doubt I was at a Yankees game. My main goal was to get a ball for my sister.

I had to pay attention because baseballs were flying in our direction. As I looked at the batter taking practice swings, I heard the crack of the bat and a ball came in my direction. The crowd surrounding me watched the white dot grow larger as it approached. No one else had a glove, so I knew I had a good chance of catching the ball. I didn’t take my eyes off it because it was coming so quickly. I could taste the anticipation and excitement. Then everyone ducked, and I stuck out my glove. The ball landed in it with a large pop and I stared at it for a second before realizing what had happened.

People were shouting “Nice catch, kid” and patting me on the back. I was shocked and turned to make my way out of the crowd. I ran with the ball to my mom and sister.

My mom’s jaw dropped when she saw my prize, and my sister started hugging me. My dad was in the bathroom and missed the whole thing, something he still regrets.

I will never forget catching a fly ball in the stands at Yankee Stadium. Before the game, when we were leaving our house, I had asked if it were really necessary to bring my glove. I’m glad I made the right decision. If only the Yankees had won their game, the day would have been perfect. 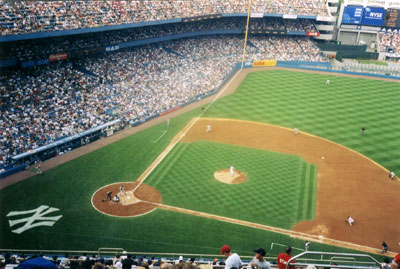