Have you ever felt uncomfortable before a big game? Have you ever found yourself in a state of mind where you could hardly figure out if you even liked the sport you were about to play? Have you ever been in a situation where your life could change forever? I know this is a bit deep for sports, but when a young man finds himself in a position to change not only his perspective but also the way everyone else views him, it’s a pretty important moment. These special moments are a result of something deep inside the athlete. These moments can be looked at as the climax of a player’s career. A special feeling is released along with the ball, and guides the fate of the player, the game, and the ball.

You see, the problem with these clutch moments in games is they give an athlete only one chance and leave many other worthy competitors empty-handed. Reflection starts, and the endorphins begin to run through your system. Because stress basically makes you stupid, the athlete who might have been capable of taking the shot may be totally overwhelmed or just plain scared.

Michael Jordan, arguably the greatest clutch player ever, became immune to the effects of the last-minute shot. He began to live for those moments. No one had ever seen a player like this before - he would rather play a game that came down to the last shot than a blow-out any day.

Mental strength and awareness are very important in sports. To find your comfort zone, you must have mental awareness, and to maintain your comfort zone, you must have mental strength. When you fear something in a game it either can be used as fuel or it can be your kryptonite. When intimidated, your comfort zone disappears and you feel vulnerable. You pray you don’t get the ball, because it probably won’t go in. Sport analysts would say that Michael Jordan willed the ball into the hoop, and as ridiculous as this may sound, it’s true in part. Michael Jordan’s undying love for the game of basketball, and his cool and collected nature during those situations, are why the ball swished through the net in most big games.

Michael Jordan is one of the few athletes who can make vulnerability his accomplice and use it to strengthen his mentality. To quote Muhammad Ali, “Champions aren’t made in the gyms or on the court. Champions are made of something deep inside - a desire, a dream, a vision.” To me, that is exactly what Michael Jordan had.

Michael Jordan has had this vision since he was young. He was cut from his high school team, and his coach told him he would never amount to anything in sports and should give up. Well, that coach is eating his words now. Michael Jordan, though very well known for his six NBA championships with the Bulls, is probably better known for his strong work ethic every day he played. He worked to become a starter on his high school team, and it paid off. His senior year in high school he averaged a triple double and was elected to the McDonald’s High School All-American team. He was recruited by the University of North Carolina and won an NCAA Championship under Dean Smith. He was the third selection of the Chicago Bulls in the 1984 NBA draft and went on to be rookie of the year.

But throughout his astonishing career, that work ethic which began in high school and college never died. Michael Jordan was one of the few players who could inspire those around him and make them play up to his level. That is how he won six NBA titles, and that is why he will go down in history as the greatest basketball player ever.

This is why Michael Jordan is one of my idols. His athletic accomplishments are impressive, but they are even more impressive when looked at closely. If you read his books (or those written about him), his words touch the soul of athletes, because they are spoken by a true athlete.

In my opinion, no one will match his performance. Of course players can shoot, dunk, and run, but can they meet the consistency and overall leadership Michael Jordan showed in his amazing NBA career? Players like Lebron James and Kobe Bryant can be compared to Michael Jordan athletically, offensively, and defensively, but Michael Jordan possessed an unprecedented tunnel vision that allowed him to focus on something and then accomplish it. That is how he became who he is today.

Michael Jordan is a great role model for all athletes because he is truly a pure athlete and also a great person. He keeps his priorities straight and consistently puts others before him. Thank you, Michael Jordan, for continuing your inspiring work off the court. 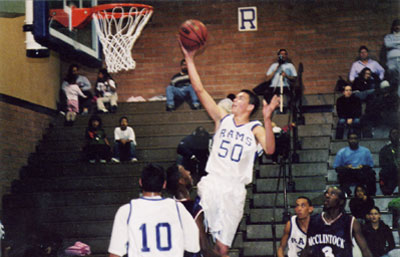 RRicks9 SILVER said...
on May. 5 2017 at 2:55 am
RRicks9 SILVER, Tirana, Other
6 articles 0 photos 11 comments
View profile
You can never be as good as #23!!!!
joshwawr2 BRONZE said...
on Apr. 26 2016 at 8:47 am
joshwawr2 BRONZE, Columbus, New Jersey
1 article 0 photos 3 comments
View profile
Mental strength is definitely one of the reasons Michael Jordan was so great. I like how you described how this gave him an advantage over the common athlete. I know how pressure can get to a person late in game because I have been on both sides of that situation.
Ghost_Rider14 said...
on Apr. 2 2014 at 11:08 am
Ghost_Rider14, Pompano Beach, Florida
0 articles 0 photos 2 comments

Favorite Quote:
you cant live in fear- Me

Favorite Quote:
"The only place where success comes before work is in the dictionary."- Vince Lombardi

View profile
meehhhh......... definetly dodn't treat everyone the right way (like people "behind the scenes")
Indiana Hoosier 22 said...
on Apr. 26 2010 at 9:15 am
I loved this article because sometimes that's how I feel in some games.
mz.hood said...
on Feb. 2 2010 at 2:47 pm
It doesnt matter who u think is better cause no matter wat ur still comparing a player to MJ so therefore making him the best player, he is the GREATEST there are others close bt none have past
ronaldo said...
on Dec. 22 2009 at 8:28 am
micheal jordan best sportmanship ever.
MJFan23 said...
on Jun. 6 2009 at 7:14 pm
Great story!! Well written and very true!! Michael Jordan definitely is the best basketball player to ever play, as well as a wonderful role model. Thanks for writing this.