Baseball is remembered by the moments. The game that we all know and love today has a very rich history of iconic moments that no one will ever forget. Some of the moments that have shaped the game are Babe Ruth’s called shot, Willie Mays’ circus catch, and Joe Carter’s World Series-winning home run. Those moments are remembered as being triumphant and displaying exceptional levels of talent. However, some moments live in infamy. One of, if not the most infamous moments in the beloved history of Major League Baseball starred the Kansas City Royals Hall of Fame third baseman, George Brett, and his bat. In the 9th inning of a regular-season matchup on July 24, 1983, against the New York Yankees, George Brett hit a game-winning home run. Little did he know, his weapon of choice would soon become the center of one of the most controversial plays in the history of Major League Baseball.

With two outs in the top of the 9th inning at Old Yankee Stadium, the New York Yankees were looking like they were going to win a 4-3 ballgame, as they had just brought in Hall of Fame closing pitcher, Rich “Goose” Gossage, to shut the door on the visiting Kansas City Royals. Gossage was brought in to face a prime George Brett, who was always a threat to do damage at the plate in the most crucial moments in any given ballgame. With shortstop U L Washington on first base, George Brett connected on a high fastball and hit a mammoth of a home run, sending the ball well into the right-field bleachers for a two-run home run and giving the Royals a 5-4 lead late in the ballgame. However, as Brett crossed home plate, Yankees manager Billy Martin came out from the Yankee dugout, walked onto the field, and requested rookie home plate umpire Tim McClelland to inspect Brett’s bat.

Before the game, several Yankees noticed an excessive amount of pine tar smothered on George Brett’s bat. Pine tar is a form of tar produced by the high-temperature carbonization of pine wood in anoxic conditions. Pine tar is applied to the handles of baseball bats to improve a batter’s grip. However, there are limitations on the amount of pine tar a player can use, as too much of the substance would potentially give the batter an unfair advantage over the opposing pitcher. According to Rule 1.10(c) of the Official Rules of Major League Baseball, the amount of pine tar applied to a player’s bat can exceed no more than 18 inches. Knowing this, Billy Martin chose to keep quiet on the matter until it was strategically useful to do so. As George Brett crossed home plate, Billy Martin, along with his great knowledge of the game, sprung into action.

With George Brett anxiously looking on from the Royals dugout, Tim McClelland, along with Billy Martin and the rest of his umpiring crew, examined the bat. By measuring the extent of the pine tar against the width of home plate(17 inches), they determined that the amount of pine tar applied to the bat did in fact exceed the allotted amount by Rule 1.10(c) of the Major League Baseball rule book. At the time, any hit earned using a bat such as the one George Brett used was defined as “an illegally batted ball,” and under the terms of then-implemented Rule 6.06, any batter who hit an illegally batted ball was automatically called out. Under this interpretation, Brett’s home run was made void, and he was called out on the play, giving the Yankees a 4-3 victory over the Royals. An infuriated George Brett stormed out of the Royals and went into a completely raging frenzy, having to be forcibly restrained from hitting Tim McClelland. Despite the seething protests from Brett and Royals manager Dick Howser, McClelland’s ruling stood. However, the Kansas City Royals would not take lightly to the way the game had ended. The organization would demand that American League president, Lee MacPhail, deliver his judgment on the matter.

Put it on the Board!

Four days after the game, MacPhail upheld the Royals’ adamant protest. As the basis for his decision, MacPhail noted that “the spirit of the restriction” on pine-tarred bats was derived not from the fear of an unfair advantage, rather the simple economics of the game. Any contact with pine tar would alter the color of the ball, rendering it unsuitable for play, and furthermore requiring that the ball be discarded and replaced, which increased the home team’s cost of supplying balls for use in a game. MacPhail delivered the verdict that George Brett had not disobeyed the overall spirit of the rules of the game, nor did he deliberately alter the bat to improve the distance factor. MacPhail thus reinstated Brett’s home run that ultimately won the ballgame for the Kansas City Royals. Lee MacPhail ordered that the game be resumed on August 18, 1983, from the point of Brett’s home run. However, in response to MacPhail’s ruling regarding the pine tar predicament, the New York Yankees were predictably angry, and they weren’t going to lose without a fight.

Before the first pitch of the resumed ballgame, Yankees pitcher George Frazier threw the ball to first base to challenge Brett’s home run on the premise that George Brett had not touched first base during his home run trot. Frazier then threw over to second base to argue that neither Brett nor U L Washington had touched second base whilst they were rounding the bases. As Billy Martin went onto the field to strengthen the influence of the Yankees’ protest, Dave Phillips, the chief of the new umpiring crew that had been assigned to officiate the resumed game, presented Martin with a written statement from Lee MacPhail’s administrative assistant, Bob Fischel. Fischel had anticipated that the Yankees would attempt to stir up some kind of drama to dispute the home run and, under this notion, had all of the four umpires from the original July 24 game sign the note to acknowledge that both George Brett and U L Washington had indeed touched every base. After the Yankees’ posthumous debate of the home run, the game was officially resumed, and the Kansas City Royals defeated the New York Yankees 5 runs to 4.

George Brett’s pine tar-covered bat is on display for the general public to see at the National Baseball Hall of Fame and Museum in Cooperstown, New York. The home run ball was caught by journalist Ephraim Schwartz, who sold the ball to the then-partial owner of the New York Yankees, Barry Halper, for a generous $1,300. In 2010, Major League Baseball revised Rule 1.10(c), providing clarification on the consequences that players will face for the excessive use of pine tar on a bat. Baseball’s legacy is owed to the payers and the moments that they create. George Brett was compensated by Major League Baseball in 1999 when he was inducted into the Hall of Fame. The image of George Brett charging at Tim McClelland on July 24, 1983, is forever etched into the minds of baseball fanatics across the nation and is synonymously known as “The Pine Tar Incident.” 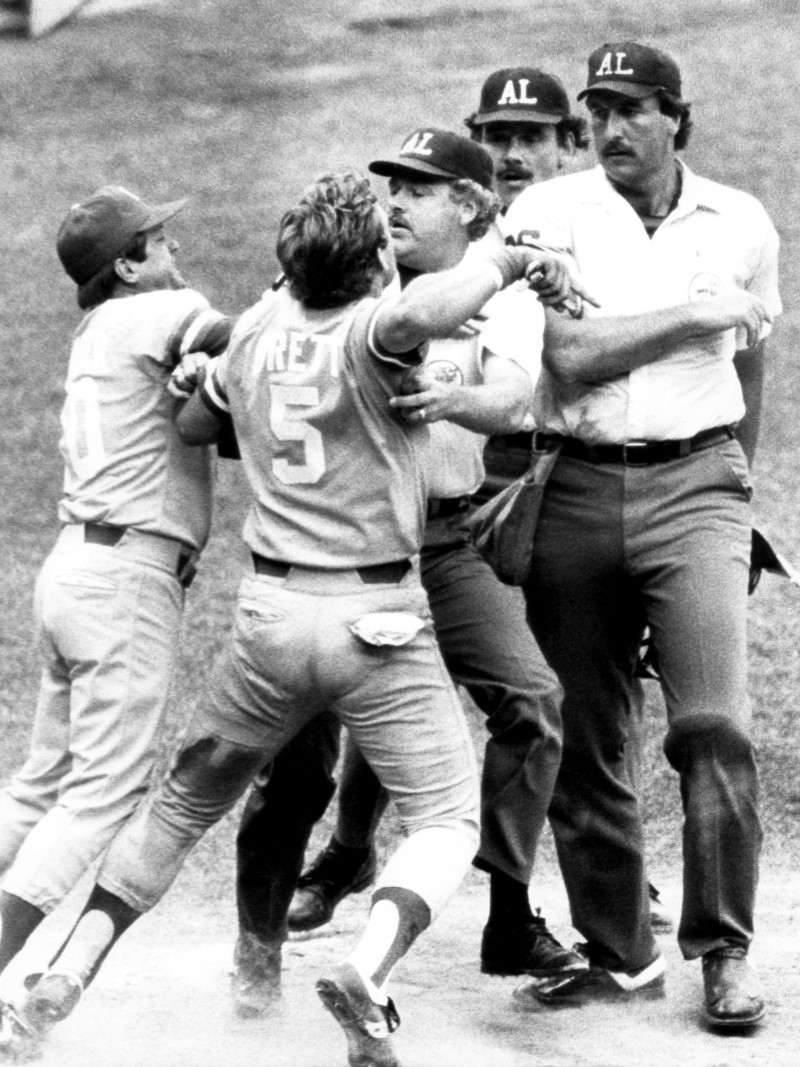