The life of a cross country runner is definitely not one to lust after. Waking up at 6:00 in the morning to go run 10 miles probably isn’t everyone’s cup of tea. I’m sure if the average person did this before school, they would boast to all their friends and sure enough, the entire school would hear about it. So isn’t it ironic that the entire sport of cross country gets absolutely no attention at all?

It’s so uplifting to watch all the football and volleyball players walk out onto the court at pep rallies. They sit in the chairs as if the chairs are thrones, knowing very well that the attention of the entire school is on them. Meanwhile, the cross country team watches from up in the stands, awaiting their race the next morning.

“Come support the volleyball players tonight as they face off against the Fighting Farmers at 6:30 in the auditorium!”

And of course, don’t let me forget football. They would probably die if they weren’t acknowledged, considering they wake up “so early.” And don’t forget to let them tell you about how “hard” their workout was. I’m sure two 20 meter sprints really took the life right out of their sleep-deprived bodies.

“Come out to the football game tonight and support your Marauders as they face off against our rival, Flower Mound High School!”

Who could forget tonight’s the big game? For crying out loud, half the school probably bought a $20 shirt that literally says “Battle of the Mound” on the front of it.

The entire stadium erupts with screams and cheers. The football coach walks off the court and the rest of the pep rally is followed by the embracing of each other’s pinkies as we hum the Alma Mater. Sitting together, my fellow teammates and I make sarcastic comments pointing fun at the fact that, once again, we did not get acknowledged at the pep rally. But this is typical. It makes sense that no one cares about us, considering they don’t even know the difference between cross country and track. However, football players should notice us, right? When they come jogging out of the locker room, we’ve already completed eight laps on the track. They must think it’s pretty fun to purposely stand at the edge of the track, acting as though they’re going to run us over as we complete another lap – our 16th to be exact. Their sarcastic comments are much appreciated:  “Come on, girls! Run faster.” It means a lot coming from a boy who simply stands on the sideline and watches us. I know that you notice us; we literally run into you every morning.

At pep rallies, however, it’s all about you. You get the candy and the nice new jerseys to strut around in all day. You get the t-shirts and the announcements reminding the entire school about how you play Flower Mound this coming Friday night. We get … nothing. We face off against Flower Mound High School every Saturday, but of course no one acknowledges that. Our hard work doesn’t get appreciated and administrators still wonder why our school spirit is so low. Maybe it’s because only the big name sports such as volleyball, football, soccer, and even baseball get supported Students hardly ever hear about how the FFA or even the calculator team is doing.

These sports need to share the spotlight with other extracurriculars. I’m not expecting students to show up at our meets at 7:00 a.m. in the morning – but some recognition would be nice. 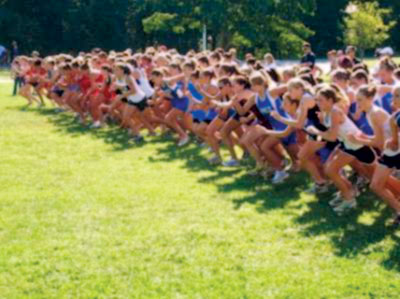 I run cross country and feel as though the sport is never recognized.

Favorite Quote:
"When you reach the end of your rope, tie a knot in it and hang on."
-Franklin D. Roosevelt

View profile
This is pretty true... I'm a swimmer and I feel the same way lol
JoeBiden said...
on Feb. 2 2021 at 1:52 pm
JoeBiden, Washington, District Of Columbia
0 articles 0 photos 14 comments

- President Biden
JonKarlo said...
on Dec. 19 2019 at 2:31 pm
JonKarlo, Sacramento, California
0 articles 0 photos 2 comments
View profile
This article has very good details and imagery. Also this is very descriptive for your opinion which is good.
i-dont-care said...
on Mar. 22 2019 at 8:02 am
i-dont-care, Mt Sterling, Ohio
0 articles 0 photos 5 comments
View profile
at least baseball is a sport unlike track, cross country and golf, also where is basketball and cricket
MacDaddyBee131 said...
on Jan. 31 2019 at 5:07 pm
MacDaddyBee131, Aurora, Illinois
0 articles 0 photos 3 comments
View profile
Very true buuuuuuuut i think its fair to have the pep rally to the most popular sport. If your school was famous for X-Country then i'm pretty sure that they would have a pep rally before your big meets.