The Hound of Farragut Street MAG

It was huge. Its teeth were a thousand jagged shards of glass; its eyes endless pits of flame. As it prowled towards me, lips pulled back in a snarl and muscular haunches rippling under taut skin, I remembered the words of my mother, who at that point I was certain I would never see again. “Don’t run. Whatever you do, don’t run, it provokes them.” But when I looked into those dark, slanted eyes, filled with bloodlust and malice, heaven help me, I ran.

Feet pounding on the worn asphalt, the only thing I could think of beyond my mind-numbing fear was: “How did it come to this?”

Olivia had said it would be fine, and I had trusted her. She said the dog was gentle and wouldn’t hurt a fly, let alone a seven-year-old girl. But when my friend’s pet came into the backyard while we were playing in the sandbox, I knew immediately she was wrong.

Daisy paid her no attention. Her eyes were already fixed on me like I was the biggest steak in the butcher shop, and that was when I realized she had been waiting for me. This thing, this monstrosity, had been waiting for me right here in Olivia’s backyard for the last seven years, while I grew up completely unaware of my forthcoming demise. This was it. This was the moment I was going to die.

I rose to my feet, my eyes never leaving those of that bloodthirsty fiend.

“Hey, Ic—” Olivia began, but I was already gone, up the driveway and into the front yard, running faster than a cat who has heard a can opener. Daisy was right behind, her high-pitched yips like a hunting cry. I sped on to the street, hoping for some sort of sanctuary; none was in sight. My own house was too far away to reach before I would collapse from exhaustion, and the only person I knew on the block was Olivia. Her house would be safe, and I cursed myself for not running inside in the first place. There was nothing for it but to make a U-turn.

Daisy was so close behind that I was certain I could feel her hot breath on my shins. I sprinted to the opposite side of the street and turned back the way I came. Short legs pumping, I ran like my life depended on it.

As I neared the house, I saw Olivia in the front yard. She was trying to call Daisy to her, though she might as well have been talking to herself for all the good it did. I ran right past her to the door and attempted to pull it open. It was locked. There was nowhere else for me to run, except…

I leapt off the front steps and into the shrubbery that lined the front of the house, crashing through it and onto the driveway, where a large silver truck was parked. I took a flying jump and landed on the hood, where I pulled myself up over the windshield and onto the top of the car. There I huddled, shaking and tearful, as Daisy tried in vain to reach me, her claws scratching against the side of the car.

A door slammed open, and Olivia’s father and sister, Mia, ran out of the house. Mia sprinted over to Daisy and snatched her up, scolding her roundly. Daisy was dwarfed in her arms; all her Chihuahua ferocity extinguished. Olivia’s father eventually convinced me to get off the truck, and after he offered some awkward words of consolation, he went inside. Still fighting back tears, I allowed Olivia to walk me home.

It was a few weeks before I finally had the courage to go back to Olivia’s house. I trod reluctantly into her backyard, my eyes glancing left and right for any sign of danger. But there was nothing.

I actually started having a good time with my friend, and by the time dusk was coming on, I had almost forgotten about the awful incident of my last visit. Just as I was preparing to leave, I heard a noise — the yip of a small dog. I froze.

But I was already gone. 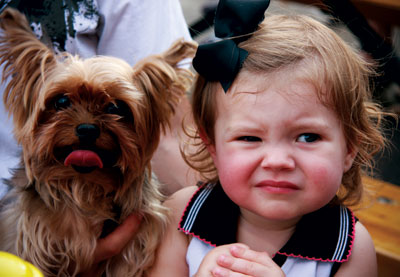 The reason I had a fear of dogs for a large portion of my childhood (and still kind of do). Told as best I can remember it. Names have been changed even though there's nothing particularly incriminating about this piece.

Favorite Quote:
“Funny how a single word can change everything in your life."
"It is not funny at all. Steel is power. Money is power. But of all the things in all the worlds, words are power.”

View profile
Woooow. A Chihuahua? That's great. Those little things are vicious. Seriously, well done on this, though- I was imagining a big, monstrous dog, and here's this little Chihuahua.