The shrill whistle of the referee blew, and we circled each other. The representative from the White Tiger Taekwondo School was bouncing lightly on his feet, while I was plodding around him in my sweaty gear. I had sparred eight people before this round, moving up the ranks until I got to the final match. The one which would determine the first place winner for the teen group and the best fighter in Libertyville.


The boy sparring me was about my height, maybe a bit taller. Brown hair with a dyed streak of blond, blue eyes.


As I tried to lightly bounce on my feet, a memory flashed through my mind. The same boy, sneering at me, one year ago. I was a red belt then, he was a black belt. I rushed in, recklessly. He smoothly dodged my attack and reversed side kicked me directly to the chest. The breath whooshed out of me and I fell over. I got up, only to get pummeled again.


I kept on kicking, he kept on dodging and blocking and scoring points. Finally, the match was over. He had won first place title. I went home and iced my bruises for two days after that.


I was back on the mat. Now, we were evenly matched, both black belts. He smirked at me, and I knew that he remembered me. Now I was here to prove him wrong. But how? I was so tired, so exhausted, on the verge of collapsing on my first kick. I could just take a nap right there, right then. No, I thought to myself. I have to win this.


In sparring classes, I had perfected my skills and proved myself the best fighter in the whole taekwondo school, except for the master, of course. I had completely changed from my former style of rushing like a bull to weaving and dodging and catching the opponent off guard, like a snake.


The boy, though, was ready to leap at me. I could see it by the tensing of his muscles and the leaning of his feet.


I have to win this, to prove to him and everybody else that I can spar just as good, no, better than him.  Now, there was no more tiredness. I was a snake. I felt the power and energy and adrenaline rushing through me. I was a whirlwind of kicks and punches; lashing out with hand and foot, scoring one point after another. The judges were scribbling on their papers intensely.


As he stumbled back, away from my tornado, I saw the clock. Fifteen seconds remaining. The referee stared intently at my moves, making sure that every one of them was legal. The whistle blew again, to signal the end of the match.


I never knew how hard I had fought that day until I was the video footage from the security cameras. I was declared winner of that round, the first place winner for the teen group—and the best fighter in Libertyville. 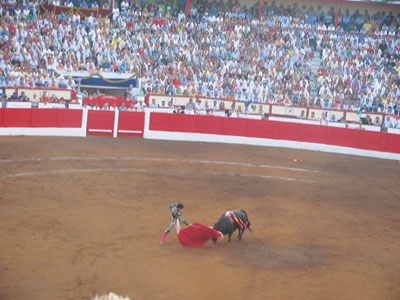