Screams in the dark | Teen Ink

Screams in the dark

Favorite Quote:
“Because while the truncheon may be used in lieu of conversation, words will always retain their power. Words offer the means to meaning, and for those who will listen, the enunciation of truth. And the truth is, there is something terribly wrong with this country, isn't there? Cruelty and injustice, intolerance and oppression. And where once you had the freedom to object, to think and speak as you saw fit, you now have censors and systems of surveillance coercing your conformity and soliciting your submission. How did this happen? Who's to blame? Well certainly there are those more responsible than others, and they will be held accountable, but again truth be told, if you're looking for the guilty, you need only look into a mirror. I know why you did it. I know you were afraid. Who wouldn't be? War, terror, disease. There were a myriad of problems which conspired to corrupt your reason and rob you of your common sense. ”

I stood there, awaiting my turn. My stomach churned and I felt my lunch coming back up to surprise the people around me. Beads of sweat slowly trickled down my forehead and down my neck, being soaked up by my frizzy, red hair. My palms were sweaty as they held onto the ends of my now stretched-out shirt. My legs were also crossed because I had a deep feeling that I was going to pee in my pants.

Everything around me was dark. All I could see were glows around the room. They looks like green eyes staring at me.

I watched as people of all ages shivered from the coldness. The screams were deafening. I gulped. I was going to go soon. It would be my turn. I would be pulled away into the dark and I might never return.

I watched a little boy cry as his mother held him close by. Oh god I can’t do this!

My breath became short and quick. I might hyperventilate soon if I didn't stay calm. I closed my eyes, amazed that it wasn't any darker with my eyes closed, and counted to ten. I exhaled a deep sigh and looked around. There was a sudden, high-pitched laughter from far off and sounds of bullets being shot. People’s high pitched screaming reacted to it. Red flashed before my eyes. Blood? Was it blood?

“You’re next.” A tall, muscular man told me with a large grin, seeing my fear. I walked forward along with other strangers I didn't know. I took a seat, looking around one last time. Goodbye.

I felt a strong pressure pushing into my stomach and another one over my shoulders. The last time I was here, I was able to escape, but not this time.

“Have Fun.” The man said before pressing a few glowing buttons. I heard a bunch of recognizable noises. There was screeching that hurt your ears. There was clinking of metal. Worst of all there was the sound of the other people behind me. Their murmurs and early screams sent shivers down my back. The ground began to shake under me. I held my breath until the sudden burst of air fit my face. There was a blinding light. Was I dead? I tried my best to open my eyes to notice I was staring straight up at the sky, gray clouds slowly grew closer to me. I was dead. I was going to heaven. What else could be happening?

I could reach out my arm to stroke a cloud, but before I could even try I suddenly stopped midair. Oh no, was god questioning whether I deserved to go to heaven or not? Was I going to be sent to hell? There was a loud screech and suddenly I was looking down at the ground. Oh no, I was going to hell! A loud boom blasted through my ears and I was being sent straight at the ground. I, along with the other people, began to scream at the top of our lungs. My hair flew all over my face. Once I could move my hair away I noticed I was in the dark again.

There he was! The man with a gun in his hand. He let out a terrible laugh and aimed the gun straight at me and the person sitting next to me.

He shot the gun, a light flashing at the opening of the gun. He missed me, he missed all of us, but he continued to laugh and we sped away back into the open air. I suddenly could smell the aroma of popcorn. I heard children running around under me. I was sent up in the air and in a complete circle, my blood rushing to my head and back to my body. I screamed, giving myself a headache.

Suddenly I was jerked forward and there was another screeching sound. The tall, muscular man helped me up.

“Please exit towards your left.” He told all of us. I stood up on my shaking legs and walked away through the dark and down multiple stairs. Near the entrance I could see my brothers waiting for me.

“How was the roller coaster?” my youngest brother asked me. I began to stretch my arms and crack my back.

“It was a silly baby ride.” I answered with a fake grin. 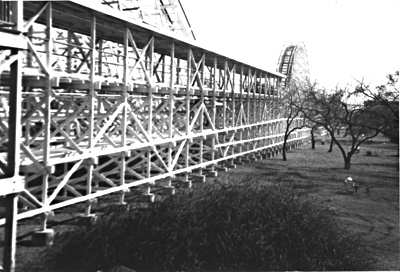 Favorite Quote:
“If it weren’t for the coffee, I’d have no identifiable personality whatsoever.” –David Letterman