Favorite Quote:
"Two roads diverged in a yellow wood, but I took the one less traveled by, and that has made all the difference."

After relocating to New York in 1986 from Paris, Le Bernadin is considered to be among the top restaurants in the world, securing the title of #1 for Food and Popularity in the Zagat survey as well as three stars in the highly renowned Michelin Guide.

Its head chef, Eric Ripert, is seen today as one of the most accomplished French chefs of this generation. His versatility and flair for the French cuisine stems from a lifelong dedication to the culinary art. Even as a young boy in France, Mr. Ripert was seen as an exceptional cook, learning under the guidance of his grandmother. Nevertheless, in order to advance his skills, Mr. Ripert decided to attend a culinary school in Perpignan where he was taught to prepare traditional French dishes such as Foie Gras and Frogs' Legs. From there on out, Eric Ripert knew where his life was going as he continued practicing alongside some of the greatest chefs of his time ( Joel Robuchon, David Bouley, etc.)

Recently, I, along with my family, went to Le Bernadin in search of an unparalleled experience. The instant we pushed through the revolving doors, our high expectations were met. Starting the unforgettable escapade, was a very gracious matradee who brought us to our table. She patiently clarified the menu format in which she then continued to the next table. And so, she left us to absorb the dazzling interior. We were sitting in the center of the newly designed Le Bernadin; a glass-panelled, white table-clothed heaven. To the back of the room was a gorgeous picture of the ocean, enhancing the seafood aura of this gastronomic mecca. And then there was the table-wear. The plates were an intricately designed silver which fittingly had bubble-like imprints along the sides. And to top it all off was the sea-salt smell of the restaurant; such a relieving aroma in comparison to the polluted air of Time's Square.

But most impressive, or rather mind blowing, was the food. In ordering the four course prix fixe, you choose one dish from each of the four categories; Almost Raw, Barely Touched, Lightly Cooked, and Dessert. Although it took a good fifteen minutes of looking through all the divine options, I was finally able to make my decision. I ordered the following: the "Striped Bass" from their almost raw section, the "Octopus" from their barely touched section, the"Black Bass" from their lightly cooked section, and the "Hazelnut-Marshmellow" from the dessert menu. The first of the four transcendent courses, the "Striped Bass," was superb. The artichoke and baby fennel that accompanied it were crisp and airy; this was due to their minimal preparation which included solely a drizzle of black olive oil and squirt of lemon. The bass itself was cut into a paper-thin fillet of decadence with every bite bringing unbelievable flavor and and a natural feel to my mouth.

Next was the "Octopus". On the rectangular platter was a mix of freshly cut squid drizzled in a green olive and black garlic emulsion. With the perfect mix of crispness and and satiny, the dish was evidently delectable. My parents assure me as well that the wine pairing augmented its flavor; in my view, a piece of fish with such immense flavor and such distinct preparation needs no assistance. And the last of the savory courses was a crunchy Black Bass accompanied with pickled cucumbers in a black-garlic Persian lemon sauce-pure splendor! Its elegance in presentation along with the clever combination of mouth-bursting flavors make it more than simply an aesthetically pleasing dish. Rather it is a monumental step in the world of seafood or at least, seafood in New York.

Nevertheless, the most notable part of my meal was definitely the dessert. Simply the name, "Hazlenut-Marshmellow," aroused my taste-buds. This dessert, a light chocolate ganache with vanilla marshmallow and hazelnut ice cream is certainly not for those who eat sparingly; I would be lying if I said that it looked salubrious. Be that as it may, it's also that kind of dish that you can't turn down. Its sugary deliciousness lets one experience the three basic foundations of any good dessert; hazelnut, vanilla, and chocolate, in a highly flavorful manner.

All in all, by the time the check and cute platter of petits fours arrived, I was more than pleased; in fact, I was ready to bow down to Mr. Ripert and the entire staff. People talk about finding the finest restaurant in the world, and whether that constitutes to the service, food, or decor, Le Bernadin comes pretty close to perfection. Its refined look, courteous service, and unparalleled food are all testaments to Mr. Ripert's dedication and passion for the art of gastronomy. So, while it may seem excessively expensive for a two-three hour dinner with your family, the price payed at Le Bernadin is definitely worth it considering the fact that it's a once in a lifetime experience-if you can get in of course. 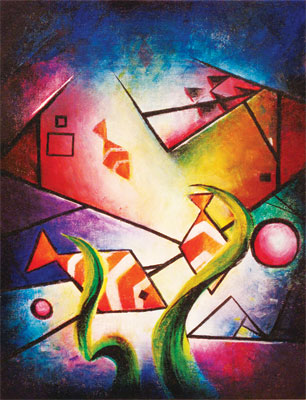