Being a Balletrina | Teen Ink

"Dance for yourself. If someone understands, good. If not, then no matter. Go right on doing what you love. (Lois Hurst)" Thank God I love dance, otherwise I would get the heck out of this place. Nothing is fun about getting yelled at by some old guy to "pull up your knees,” or working for the enjoyment of an audience who is too scared to sit by the stage. Basically, nothing is fun about ballet. Why am I practicing this torturous art form? The teachers treat students like they are a ball of lint on the inside of their shoe. Eventually, they learn that they are human beings, but that takes time and effort.

Ballet creates a fiery, burning pain in your muscles, which for me started about two years ago, when I switched to a new studio. The DanceX’s ballet teachers defiantly pushed me beyond my limits. I even have the x-rays to prove it. Yet, the worst was on the horizon.

He is known to the dancing community as Ted. Theodore is his full name. When I first met Ted, I thought that he was pretty bizarre! Dressed in high-waist exercise pants and a magenta colored wife beater, he seemed surprisingly pleasant. We had heard so much about him, how he had danced in the New York and Washington ballet companies. Ted had worked with movie stars and Broadway actresses! We were so lucky that he picked to work at The DanceX! Oh, were we so wrong.

In the fall, when the leaves just started to change color, we began our new dance season. Driving to the studio, I watched the auburn gold leaves sway to the beat of the wind as they fell cautiously to the ground. My stomach bubbled with excitement. I had not seen most of my dance friends since our last competition in June! As soon as I was dropped off at the studio, I ran up the stairs to the loft where my class would begin. Though I was only three minutes late, the class had already started. I inhaled the familiar scent of pointe shoe rosin and sweat. Grabbing my pink leather shoes from my bag, I ran into the room and grabbed that barre.

“Leave. Now,” a voice demanded the instant I shuffled into the room. The chirpy tone of Ted’s voice did not match his words. The smile which had once made me enthusiastic to dance was erased and now replaced with a scowl of disgust. “If you don’t show enough respect to turn up to my class on time, then I will assume that you aren’t interested in being here.”

My eyes widened. Ted’s glare was sharp enough to pierce through granite and cold enough to freeze a fire. After a quick glance around the room, I saw that my face was mirrored onto several of my other team members. I turned around and quietly left, shocked and embarrassed.

After returning to the class a few minutes later, I participated cautiously. I still had a crestfallen feeling in my gut from being scolded earlier. Worried that further mistakes would result in Ted reprimanding me, I practiced carefully and with detail, like a heart surgeon operating on the US President.

The next few weeks continued in a similar manner. My dance life was hazed over with white. The bleached florescent lights reflected off the rubber based floor. My chalky ballet shoes pointed and shuffled. The whites of my eyes would pop in fright when my teacher neared me. My hands clenched the barre with fierceness, turning my palms also white. My whole world was tinted the color of stars, mind the rare splash of an occasional black leotard or red tutu.
“Pull up those knees, it will make your legs stronger! Come on now, Marra, you really don’t like to use your legs, do you?” Ted was sitting on the ground next to my feet as I practiced my fouettés. His thick callused hands lightly slapped my thighs, forcing them to flex in discomfort. The ache in my legs was close to torture level. “You are the worst in the class and you’re not even trying to become better!”
What? He thought that I was not trying to cure my mistakes? The thoughts screeched through my mind at 346 miles per hour. I am practically dying here and he doesn’t think I am trying! My eyes blinked, trying to keep back the hot tears. I was baffled by his obliviousness to my distress. As noiselessly as possible, I let my waterworks fall. I silently watched as a single tear hit the ground below my feet.
About a week later during ballet class, my team was lined up in front of the mirror practicing jumps. The team captain, Maggie, inquired how hers were doing.
“Your sissonnes are excellent!” Ted replied to Maggie who was standing at the end of the line. “You were by far the best, and going down the row it just kept on getting worse and worse, until it was downright awful,” he explained, gesturing at the rest of the dancers. Everyone stared at me. It took me a few seconds to realize that I was the one at the end of the line, and that he was implying that I was the one he thought was the most inadequate. My teeth were tightly clenched. I wanted to slap Ted across his grotesque old face. I knew that I was not as talented as Maggie, but I was the worst? I looked at the ground to hide my eyes, which were tempted to leak. I softly asked if I could use the restroom, and as soon as I had stepped out of the room I let the tears fall. After a few minutes I returned to class with a camouflaged expression which hid my pain.
Even as tears slid down my cheeks, I did not stop working. I promised myself that I would prove my worth to Ted, that I would show him wrong. Sweat spotted the floor around me, symbolizing my determination. Following class each week, I made a routine of going home, icing my damaged muscles, and then going over muscle training exercises. After stretching out, I would practice my ballet routines in my room. I would go over every little thing we had done in class, and worked on what Ted told me I was doing horribly. During gym class in school, instead of just goofing off with my friends during free time, I would stretch to improve my flexibility.
Even though it made my muscles feel raw, like they had been ripped right out of my calves, I took up more ballet classes at my studio. I took the courses for more practice to improve my chances of going on pointe that year. My dream is to become a pointe dancer. Dancing on the top of your toes is both painful and beautiful. I was willing to do anything to achieve this new level of elegance. This longing is what pushed me onward. During class I worked with the effort of a hungry fisherman. The weeks went by at snail speed. Eventually, I got better from practice and hard work in class. I started taking pride in my abilities and grace, and pretty soon I started to enjoy ballet! Even Ted started to seem better to me.
“Well, see, Marra, you are trying!” Ted exclaimed in a conversation with me a couple of months after classes started. His voice held the sweetness of pineapple. “When I remind you what you need to fix, you fix it! Your technique is so much better. I would say you could be up on pointe before Christmas!”
I over-flowed with joy. This ugly old man had actually given me a compliment! All of my hard work had made me both physically and mentally strong. Before ballet, I had never really had to go through something that required this much determination. My goal of going on pointe was within reach and ready for the grabbing.
Now when I dance in class I notice the sunlight shining through the windows to brighten my thoughts, rather than the florescent lights which made my head pulse. I notice the specific things that I am great at, like assemblés and échappés, rather than my frog-like pirouettes and my gopher-esque grands jétes. I felt like I had crossed a mountain barefoot! Though it took hard work and effort, now that I have accomplished something that I care about, I know that it was worth the pain. 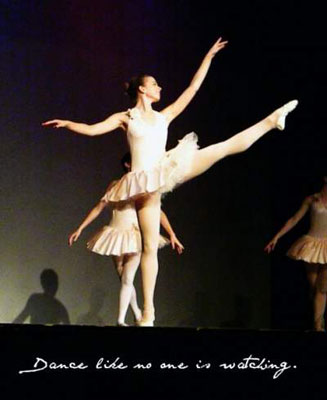 The author's comments:
When my 9th grade English teacher told me to write with my heart to fully explain something that changed me, I was honestly stuck. I had many experiences that I could tell, but very few seemed to fit my writing style. After much thought I decided on this story because I feel that it truly portrays how I felt.
Post a comment
Submit your own