You can tell that Kelly and I are sisters. I don’t think we look alike, but people always say we do. And they get us mixed up. I guess they just fail to see that I am half a head taller and that her hair is darker and glossier than mine, almost black, and longer than mine, too. She also has a different nose, flatter, like my grandad’s. I have my mom’s nose, all pointed with the dent on the very end, like a little valley. And our arms! Mine are thicker, while hers are toothpicks. Our laughs are different, too. She has several different laughs that go in order: first comes the snort, like a dainty pig, and then the little giggle, sometimes accompanied by another, louder snort. Then comes the out-loud laugh, noisy, with sucking noises in between as she tries to catch her breath. Last comes the silent convulsions; no sound, just pure, all out laughter that makes your gut ache. My laugh starts loud, like rainbow sherbert on a hot summer day. It traverses down the scale, getting lower until it dies out. Sometimes I get the silent spasms, too.


We move different. Kelly glides around. Her movements are quiet and subtle. Except when she’s running. Then she is flatfooted and loud. I run loud, too, but swing my arms more. My movements are resigned, decided. I shuffle my feet but move with determination and deliberateness. If I put my foot down, then by golly, it’s going to stay there until I decide it is going to move. Not like Kelly.


But Kelly and I aren’t all different. We talk alike. And say things at the same time. I could tell you that we’re both ninjas, but then I’d have to kill you. We have a similar sense of humor and both like dogs. We could have an entire conversation and if you weren’t us, you’d have no idea what we were talking about. For instance, we were driving down the road last week and Kelly shouted, “Gus car!” and I said, “Ya, it is, but I think Gus’ car is a little bit more blue-ish.” And she said, “Aww, Anna, don’t be a gooey chocolate chip cookie! That was clearly a Gus car!” I promptly replied, “I feel like I’ve been incarcerated in a blueberry,” with very patchy British accent that sent us both into a fit of giggles. This conversation left my poor mother completely bamboozled, a deer in the headlights, but to Kelly and me, it made perfect sense. 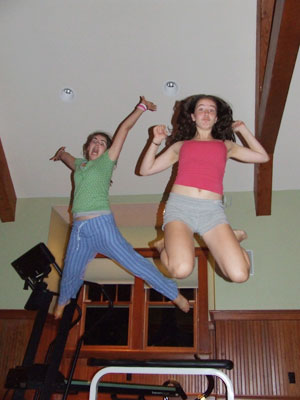