Favorite Quote:
"Love is a verb and a noun as well; you find it in the dictionary under L. They give you a description and spell it out, but they don't say what it's all about."
-Aberfeldy from the song "Love is an Arrow"

I t was September 11th, 2002. My second-grade teacher said we were going to have a moment of silence to honor those who lost their lives in the 9/11 attacks. She told us that we were not to make a peep. I raised my hand.

“Mrs. Earle,” I mumbled with trepidation. “Can I make a tiny little sound?”

“But can I just make a little sound, like hmm?”

“No, you can't make a little sound like hmm. Why would you want to anyway?”

“I don't want to, I just have to!” I scratched the back of my ear, confused. I thought that making strange sounds was something that everybody did. It wasn't until fifth grade that I found out it wasn't.

I tossed myself on the bed at the hotel in Cologne, Germany. My feet were boiling under the covers, so I stuck them out ever so slightly. My mom was awed by the hotel's architecture. I didn't understand what she saw in it – I, at ten, just wanted to stay at a hotel that had room service, a TV, a mini bar, and Internet ­access.

“Look,” she said, gazing out the heptagonal window. “The view of Cologne at night is so pretty!”

I looked at the clock. It was almost midnight and I wasn't even the tiniest bit sleepy because I was still on New York time, six hours behind. I tried to think about being in a little log cabin, watching the snow fall out my window while staying cozy beneath my duvet. Usually visualization helped me fall asleep, but it wasn't working this time, possibly because the covers at the hotel were made of itchy wool rather than down. I started getting stressed and afraid that I wasn't going to fall asleep. My mom kissed me goodnight and walked through the door into her and Dad's room.

Five minutes later I noticed that I was making the hmm sound more frequently and louder than usual. That infuriated me. I shrieked at the top of my lungs and started to frantically kick the wall. I felt like there was a bug in my throat and only the hmm sound could get it out. But no matter how much I made the sound, the bug wouldn't go away. I screamed. My dad came running in to hush me.

“Isaac, we're in a hotel!” he scolded. I started sobbing and continued kicking the walls and screaming.

“I CAN'T STOP MAKING THE HMM SOUND!” I wailed.

“You know,” I insisted. “The hmm sound! When you make a hmm sound to open your throat.”

“Like clearing your throat?” Dad asked. He was confused and exhausted from traveling.

“No, no, literally making a hmm sound.”

Dad listened as I tried to spoon-feed him what I thought was common knowledge. I thought the sound was a reflex everybody had, like swallowing or blinking. But despite my desperate attempts to get him to understand, he didn't.

“Why can't you just not do it?” he asked, intrigued by my situation.

“I don't know, Dad! It's like blinking! It just happens!”

“What happens,” Dad inquired, “if you stop?”

“Then I feel like I'm going to choke and die! Dad, don't you get this sometimes?”

“Forget it,” I sighed. I started to quietly cry again. Dad rubbed my back and worried about my strange condition.

The next day, Dad asked if there was anything else that I had to do. I gave him a short list of things I thought were normal.

“Clearing my throat, for one thing. And snapping my toes!”

I removed my worn-out light blue sock and demonstrated: I placed my second toe over my big toe and then pushed until my second toe slid off, like finger-snapping.

“It feels,” I winced, “like there's a bug under my toenail and if I don't squish it, it'll crawl up my legs.”

I slid my tongue down the small fold between my upper lip and nose and puckered my lips.

“Because there's a bug behind my lip and it's on fire and I need to put out the fire.”

The following month, I was brought to a therapist and diagnosed with Tourette's syndrome. Two years later, my diagnosis was reevaluated and confirmed along with a second diagnosis of Obsessive Compulsive Disorder, or OCD.

I still struggle with both disorders today. Because of my OCD, I feel the need for everything to be symmetrical – which is very frustrating when decorating my room, or playing puzzle games such as Tetris. Also, if I'm around metal, I need to touch it, which is bad because I always need to touch dirty cars and metal poles. Because of my vocal tics, I am forced to stay out of quiet places. Tourette's has also turned my old bad habits into uncontrollable and compulsive tics, like pulling my eyelashes.

Still, I am working hard to stop obsessively biting my nails and pulling my eyelashes and hair. OCD is difficult to treat, but I work hard every day to keep it under wraps. 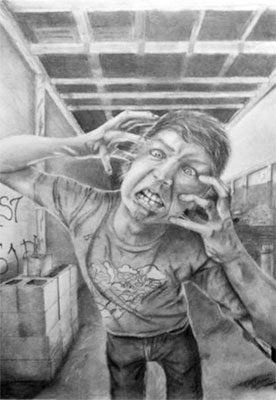 The author's comments:
Tourettes OCD is one of the most frustrating mental disorders that one can have. It has affected my life in copious ways.
Post a comment
Submit your own

View profile
I am gobsmacked! What you have written is utterly amazing and beautiful. I totally love it!
magic-esi PLATINUM said...
on Apr. 3 2010 at 8:01 pm
magic-esi PLATINUM, Hyde Park, New York
27 articles 0 photos 231 comments

View profile
In this article, you've managed to take (no offense) a slightly boring topic and make it really interesting (no offense here either.) I didn't know that much about Tourette's syndrome until now, and the way you write the article was very good and really interesting. Great job!
paperflowers said...
on Mar. 28 2010 at 3:59 pm
paperflowers, Imaginary, Indiana
0 articles 0 photos 176 comments
View profile
this is really well written. I think I may have had something like that with my feet, and there was a time when I could not stop flaring my nostrils... but never to that extreme.