The Reverie of Autumn | Teen Ink

The Reverie of Autumn

The sun begins to set, gradually painting the early autumn sky a brilliant hue of orange and gold. The fading rays pick up on the leaves that have started to turn. Each vibrant bronze, scarlet, apricot, and coffee-colored leaf is magnified in the rapidly disappearing light. I open the car door and step out, the gravel of the sprawling fairground parking lot crunching softly beneath my scuffed black shoes. I turn my gaze upward and smile, shivering slightly in the crisp air. I fasten the top button of my favorite brown, velvety blazer as I stare at the entrancing flashing lights of the midway. Welcome to the State Fair, the massive sign above the entrance reads. My anticipation has been growing for weeks. I cannot wait to be let loose in this massive, colorful, oversized playground for adults.

The State Fair marks the beginning of fall, the point of the year where I wake up nearly every day in a state of enthusiasm, or at least in high spirits. I revel in the idea of awaking to misty mornings and having to trek through frost-covered leaves. The torment of a scorching, sticky summer has given way to cool breezes with a tantalizing hint of wood smoke that you breathe in deeply. Each leaf that spirals down to the ground below seems to usher in a new holiday to celebrate.

Seasonal crops in shades akin to those in a Crayola box are made into delectable dishes and desserts, as it is essentially harvest time. Bonfires blaze and illuminate the star-flecked night sky. Towering labyrinths constructed of hay shroud the souls who bravely decide to venture inside. Every element of the season creeps in and invades your senses. In short, fall makes one feel as if they are residing in an elaborate living painting.

To me, the State Fair is the culmination of all of these feelings, experiences, and sensations packaged into the guise of a festival. As I glide through the entrance gates I am overwhelmed by the staggering amount of activities and sights to take in. I stroll down the midway winding my way through the chattering, excitable throngs of fairgoers in bliss.

I mull over my itinerary as I polish off a deep-fried, sugar-coated swirl of dough sprinkled with cinnamon. It is quickly thrown out the window when I decide to forego the loud bleating, neighing, and nauseating smells of the animal exhibit for sitting astride a gaudy, bejeweled carousel horse. Though I do decide later to pop back in for a glance at the lovable baby chicks and ducks waddle down the miniature plank into their makeshift pond, chirping and quacking as if they know they are putting on a show for their admirers.

The dazzling lights and spinning rides momentarily hypnotize me and I am addled by the ungodly amount of sugar being absorbed into my bloodstream. I sprint from each ride to the next, enjoying being whipped, spun, and tossed about like a batter in an electric cake mixer, loving it all the while.

Pausing to partake in a water gun fight on the midway, I aim for the quarter-sized target with the precision of an army sniper, but my various competitors best me; there will be no 3-foot plush elephant for me this year. My spirits are slightly dampened, but it is fleeting- I glimpse pumpkins that engulf the wheelbarrows that they are being pushed in and grin as I imagine the abundant amount of mouthwatering pies that they could produce.

Animated faces bypass me in their eagerness to watch the musicians in the Native American booth who use exotic piping flutes attract them, not unlike the snake charmers of India. But there are no angry, venomous creatures here. The mood is too carefree, too lively.

The chilly night air carries the intermingled scents and sounds of spicy Italian sausage sizzling on a grill, sickly sweet wisps of cotton candy being spun, and the clanking of chains on a set of whirling swings. Through it all, I can discern the familiar, subtle hint of wood smoke wafting into my nostrils.

I trudge exhaustedly to the mass of cars, clutching a bulging bag of souvenirs, my stomach, an absurdly oversized dragon, and a glossy, crimson-red candy apple. I am worn out, but disappointed that the magic of the evening is coming to an end. And then it dawns on me- there are eleven more days of this!

Fall has arrived; there is no doubt about that. But it doesn’t take the showy displays of foliage, the steady drop in temperature, or the beginning of the school year to make its presence known to me.

The State Fair blends together everything I love about the season and enhances the daily sense of wonder I feel during autumn. 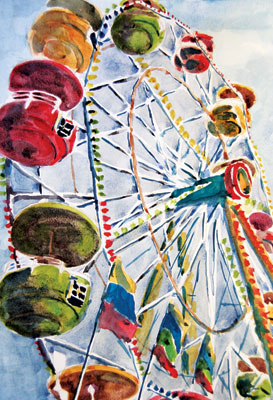 The author's comments:
A visit to the state fair and the way it made me feel like a kid again. Autumn is my favorite season and I wanted to convey how this one activity represented the entire season to me.
Post a comment
Submit your own