My dance story isn't the typical one you hear.

I wasn’t the little girl who was always dancing, begging her mom to sign her up for dance lessons. Instead, I was the little girl who knew nothing about dance and whose mom signed her up without asking her. Looking back, I am beyond grateful for her executive decision because, although I didn’t know it at the time, it introduced me to one of my greatest passions.

My Kathak journey began when I was six years old. Kathak is one of the major forms of Indian classical dance. It originated in northern India and is a form of storytelling in which dancers use footwork, hand gestures, and expressions to convey stories. I began going to weekly lessons where I was taught basic footwork patterns, spins, and gestures. Every week, I learned more and more techniques and how they could be built upon one another to create choreography. Every year we had one or two recitals where we could showcase our skills to friends and family. We also had an exam at the end of each year to test our knowledge and skills.

Although I always passed the annual exams, the first few years of my journey were rocky. I found Kathak to be fun, but for all the wrong reasons. Overlooking the connection to my culture and outlet for expression Kathak provided me with, I only enjoyed it because it was a way for me to hang out with my friends. I enjoyed laughing with my friends in class more than learning routines. I enjoyed the glitz and glam of getting ready for recitals more than actually performing in them. I would watch the older girls dance and wish I could just jump to that level. I began to care less and less about dance because I thought, ‘“What’s the point if I’m never going to be able to dance like them?” After every class, I dealt with my mom scolding me for being lazy with my posture or not showing expressions. I wouldn’t practice enough at home, and I often came to class underprepared, disappointing my mom.

As I started to grow older and more mature, my mindset shifted. I don’t know if it was the constant nagging from my mom or something within myself, but I realized that I wasn’t going to get anywhere without putting in the work. I realized that if I wanted to dance like the older girls someday, I was going to need to start working for it. I began to pick up the pace and practice at home. I recorded myself to pick out areas I needed to improve on and practiced until I perfected them. While putting away groceries in
the basement fridge, I would take advantage of the smooth, cold tile in the storage area and practice my spins. In my free time, I would go over footwork and routines in my head. Finally, after eight years of learning the art, it came time for the biggest moment in my dance career: Visharad.

A Visharad is an elaborate performance at the end of one’s Kathak training to signify graduation of the dance. Over the course of one year, four of my guru sisters and I worked to perfect the nine dances performed at our Visharad. This performance would be a culmination of our years of devotion and discipline and would act as a final way to showcase our skill to a live audience of hundreds
of people.

Preparing for the Visharad taught me some of the most important lessons that I will proudly carry with me throughout my life. Practicing with my four teammates taught me the importance of collaboration and teamwork. In order for our performance to look eloquent, our minds and bodies had to be in perfect sync. To achieve this, we attended weekly three-to-four hour lessons. As we crept closer to performance day, this turned into numerous practices a week, sometimes ending at 11 PM. Together, we spent countless hours perfecting every step of every routine. Just 10 seconds of a routine would require 30 minutes to perfect. We would practice the same six minute routine for hours on end, to ensure we were all in sync, as even one dancer out of sync would ruin the sequence. For the first time in my life, I experienced what it was like to be depended on and have to trust others in a high-stakes situation. As strenuous and demanding as these practices were, they are some of my most cherished memories and helped create precious friendships.

Not only did I learn the true importance of teamwork, but I learned how to grow from criticism. We would often receive harsh feedback from our guru when we messed up. She wasn’t afraid to hold us accountable for our mistakes, whether they were about our coordination, focus, or attitudes. However, these setbacks only taught us to persevere more, in hopes of not only improving but also making our guru proud.

After months of excitement, anticipation, and nerves, the day finally came. We began with an auspicious ritual called the ghungroo ceremony in which we each received our ghungroos from our guru after seeking blessings from both her and Lord Shiva. Ghungroos are strings of 150 bells that are worn on dancers’ ankles, and they are worn to accentuate the different rhythms executed through intricate footwork. We then performed our first number, “Ganesh Vandana.” This piece is an invocation prayer to seek blessings from the presiding deity, Lord Ganesha, the remover of all obstacles, and to welcome the audience. The next piece was the Jaipur Gharana dance. This style of dance highlights the technical aspects of dance such as intricate footwork, rapid spins, and poetic expressions. The highlight of this 16-minute piece is “sawal-jawab,” where we asked questions (sawal) and answered (jawab) through complex footwork. Jaipur was one of my personal favorite parts of the Visharad as I have always loved intricate footwork patterns and they have always been my strong suit.

Next, one of my guru sisters performed her solo — a Sufi song about devotion and appreciation of God’s acceptance of his devotees for their past sins. Next came my solo, the most nerve-wracking part of the entire journey. This was the first time I had ever performed alone on stage, and I am proud to say it went better than I could have imagined. Both my songs were in devotion to Lord Krishna, the first being a playful, lighthearted song requiring lots of emotion and expressions, something I had struggled with throughout the eight years of my dance career. However, because of my countless hours of hard work, it ended up being a success and it came naturally to me.

My second song was a fast-paced, traditional “Thumri” song, highlighting my skills of complex footwork and spins. The next piece was Tatkar, showcasing traditional todas and tukdas in the different speeds of dance: vilambit (slow), madhya (medium), and drut (fast). The sixth and seventh pieces were two more solos performed by the rest of my guru sisters. Next came Lucknow which represents the Mughal impression on Kathak. This style has Persian influence and highlights poise and elegance. Our ninth and final piece was Tarana, a beautiful combination of melody and rhythm.

This day is and always will be one of my greatest accomplishments, and I am thankful for every lesson I have learned throughout the journey. After my Visharad, I began teaching young third-year dancers at the dance studio, in hopes of instilling in them the same excitement my teachers instilled in me. I have been able to act as a role model to them, helping them form a deeper connection to Kathak and their Indian heritage. 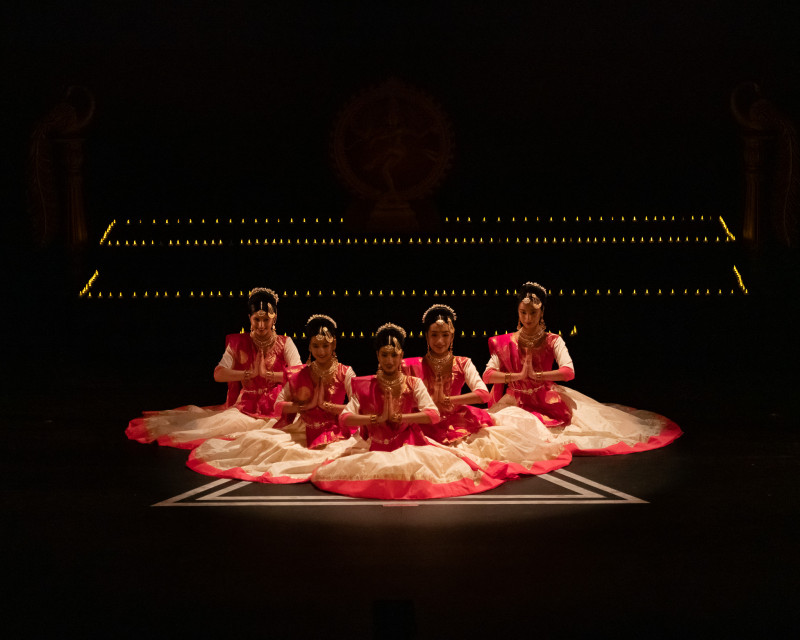 I started dancing at age 6 and it has had a huge impact on my life, both teaching me life skills as well as bringing me closer to my culture. This piece talks about my dance journey and how it transformed me as a person.