I hesitated, not remembering how long it had been since I had mentioned that old man in front of Father.

I asked him anyway, “Do you think Grandma still remembers Grandpa?”

When I finally blurted out the question, my mind was utterly empty.

“Of course. They've lived together all their lives,” he responded almost without hesitation.

Our car left the village in Jiangqiao, and I hoped to come back more often.

At the end of the Chinese New Year, when my father returned from Jiangqiao, we went for a walk together. On the wet tiles, we paused for a rest.

Father shrugged and said, “Well… I can't understand her speech anymore, she's lost all her teeth.”

Father rarely looked like that. I couldn’t divine his thoughts behind that face.

“She didn't recognize me when I first arrived home, but she did after the neighbor reminded her. Earlier today she told me her leg hurt.”

“Is it the same leg that she fell on last time?”

“No, she wants to stand up and walk on her own today. She can't stand much anymore.”

“I thought she could only stay in a wheelchair,” I murmured.

In fact, on the contrary, my mind went back to the fact that Grandma was still stubborn enough to go to the fields and grow vegetables.

Standing at the same spot, Father spoke up.

“Jiangqiao is probably going to be demolished either in the second half of the year or early next year.”

My mind was completely hollow. I had been hearing about the demolition, but it was said recently that Jiangqiao would be delayed for a few years and would not be demolished for a while. Why again?

Father and I were probably on the same page at this point. What if the village is really going to be demolished? What about Grandma? What if she isn’t accustomed to the new apartment? What will she do if she loses her garden? What else can she do all day? I didn't want to think about the retirement home as a last resort.

“This time the demolition will cover a wide range: all the way to the river. After all, Chen Jun’s house has been demolished,” Father said.

I was startled. Chen Jun's house, where we played firecrackers, badminton, and card games every Chinese New Year’s Eve. Gone? I thought of something more heartbreaking.

“Wait a second. Chen Jun's house is not at all far from our house, huh?”

“Well… The works are all done by excavation scrapers. The entire east side of the road has been demolished. Houses have been torn down.”

My brain didn’t work out at that instance.

“Wait, what do you mean? The east side of the road? What about our neighbors across the road?”

I shuddered to think about it.

“Does anyone still live there?”

What a silly question!

“How can people live there when there are no more houses? You've seen villages that have been demolished. They look the same!”

“Isn't it all in wreckages?”

“Well, it'll be cleared up a bit later.”

I felt dizzy. My mind was filled with a catastrophic scene: our bridge, the grocery shop, the demolition… I couldn't imagine if Grandma had seen the scene across the road, or the excavation scraper approaching. Would she have been scared and helpless? Would Father have felt the same way when he drove back to Jiangqiao and saw the ruins?

For me, it was a temporary vista of my childhood. For Father, it was his home.

I turned into the same look as Father. I stopped laughing, stopped trying to make jokes, and finally realized that it was too much for me. Too grieved.

I didn't know how long it was before I said, "Well, it looks like I'll have to go back to Jiangqiao before the second half of the year.”

This was the last thing I wanted to say. It was the only thing I could say too.

I began to stare at the sky, the sapphire, covered by leaves, almost dark. My heart was overwhelmed.

I couldn't sense anything else.

“Our trees. Will they be torn down too?”

“The trees on which we hang our red lanterns……”

They were the same trees my father planted when he was a child. Next to them was a field that belonged to our family property.

“I’m afraid yes. The demolition will be done from our side to the Tu Bridge and then to the river.”

“The Tu Bridge? So my cousin's house will be demolished too?”

“Then won't the village all be demolished?”

I felt like I’d hit rock bottom. I couldn't take it anymore, any other news……

“Speaking of the trees, Grandma walked up to our trees two days ago,” Father branched off the topic.

“Grandma? Did she go there alone?”

“No, she had someone accompany her and when she got there she asked, 'Why aren't there any vegetables growing in this field?’ It’s so amusing.”

I didn't quite get it.

“What does it mean?”

“She saw the field next to the tree, which was ours, and said, 'Why are there no vegetables growing here?’ The field has remained barren for years.”

It turned out that Grandma still believed she worked in the field every day.

“Yeah, once she saw her nurse growing cabbages in the garden and shouted, 'This is my land. You're prohibited to plant here!’ She almost kicked the nurse out of the house!”

We both laughed. Grandma must have believed that the nurse was trying to steal her garden.”

Somehow, I admired her stubbornness at that instance.

“The neighbors had built a bamboo shed on top of her garden to shade the vegetables, but she pushed it all down.”

I burst into laughter, but father hadn't finished telling.

“Last night our neighbors were hanging over at our house. When they left, they took their mobile phones away. Later she whispered in my ear, 'They just took something from our house.’”

Father forced a bitter smile, “She's really, really immersed in her own world.”

“We’ve studied a text in school about the crazy thoughts of the elderly. I wonder if Grandma herself knows that her mind is a bit fuzzy.”

In fact, the text was about an old woman on her deathbed, whose mind was no longer able to tell time or place. She hallucinated and communicated with people from the past in her brain. She pined for her dead husband and children and died in illusion. Of course. I didn't say the story out loud. I reckoned it was a bad analogy.

Grandma regarded farming as her only job. Even when she couldn't remember anything else, she still thought of cultivating the greens in the garden. That's what she believed was meaningful, and that tiny bit of meaning would soon be eradicated.

When I couldn't control my temper, I said, “This house is ours. What right does anyone else have to take it away?”

Father also said, “I’m considering whether to buy a new house or not, but I don't think the old lady will live much longer.”

It was utterly quiet up to this point. Father had the infinite sorrow again on his face. Every time he pushed his glasses, I thought he was wiping tears from his eyes, and if he was, I would have whimpered with him.

We were dying to go home. 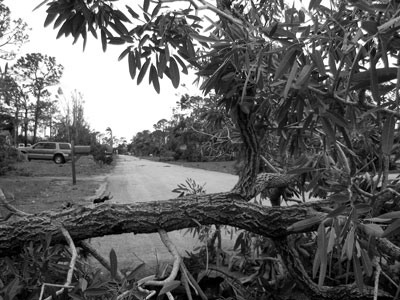