I was born in China in 2002, orphaned until adopted at age four, and brought to the United States. A couple of years passed with me adapting to the new environment. I was sent to five foster care homes, always packing a trash bag full of items I had collected from each visit. This plastic bag consisted of McDonald's toys, empty straw wrappers, squared stickers, stuffed animals, and other belongings.

Being in foster care is more complex than many would expect, and I remember a family once told me I would become adopted by them. That was not the case, and, sooner than later, I packed my belongings once again to head to another home. Moving around caused me to develop a mindset filled with worries, anxiety, and constant thinking of the worst. It wasn’t until seven years old when I finally found a forever home, and that was the last time I would ride in my foster case worker's car.

Years flew faster than a blink of an eye in my second adopted home, and I began to live a more suitable childhood. My middle school social-studies teacher had ignited my aspirations in becoming a politician and motivational speaker. I became involved by paging for the GA State Capitol, campaigning, connecting with local politicians, and working on my public speaking skills. I kept going and felt as if I was the only one who could prevent my dreams from becoming a reality. Until my sophomore year, it was brought to my parents' attention to file for a certificate of citizenship because of trying to obtain a permit. My parents did not adopt me internationally and weren't aware that my adoption was not formally completed, and my first adoptive parents did not apply for a CoC for me. The Foreign Citizenship Act of 2001 granted me to become an automatic citizen.

Adopted foreign children acquired citizenship if adoptive parents are Americans, adoption is legally finalized, already a permanent resident, under 18, and are in legal custody of the parents. I qualified, but it was in high school when my parents and I realized how crucial it is to file for the certificate.

It became a series of ups and downs where my N-600 application became a waiting game. I wanted to exercise my rights to participate in democracy, be a voice, and make a change. This certificate part was what I lacked, and I could not get a permit or feel free from my anxiety over not following through with my dreams. As a current high school senior, my anxiety of feeling as if I always had to prove that I am a citizen raced through my mind each night before bed and consumed my thinking. I kept catastrophizing if not having a certificate would pause my college plans or others making assumptions. However, those fearful ideas came to a halt when a particular mail arrived on October 14.

That day my mother cautiously handed me the mail. As an anxious person, I assumed the worst, until she read the mail aloud, stating that it was from the USCIS and that my "application for Certificate of Citizenship has been completed." She ran over to me after seeing tears streaming down my face as I cried with relief and joy. It took a solid five minutes of me calling over my mother's shoulder to express my gratitude with words, not just tears. She had explained how all those worries were for nothing and that it did work out. I knew from that day forward that I would fight for people like me to fulfill the American Dream. This became a life lesson for me because I learned that no matter how challenging something seems, eventually it will work out and to keep striving towards my dreams.

I had created an Immigration Advocacy Organization at my high school to educate students about the naturalization process and collect hygiene items for detainees. Now I could continue the organization without the distress of not having all that I needed to show my citizenship. My Swear of Oath happened on October 23, and it was the second-best day of my life. The first best day of my life was being adopted by my forever home. After that big day, I shared my photo of me holding my certificate and my role as an American to follow/protect the U.S. Constitution and be a part of democracy with my social media.

To all those struggling with citizenship or the naturalization process, understand that hope and staying vigilant about immigration rules will always help in the end. There is light at the end of the tunnel, and those struggling are never alone. Being anxious about the process is a part of it and can either be used to do what can be done or allow it to take over. After all these years, I had no idea the journey that was waiting ahead. I am grateful to say that chapter of my life closed. It is my moment to start a new adventure where I can now exhale. It is my time to spread awareness about immigration rights and the process of becoming a full-on American. 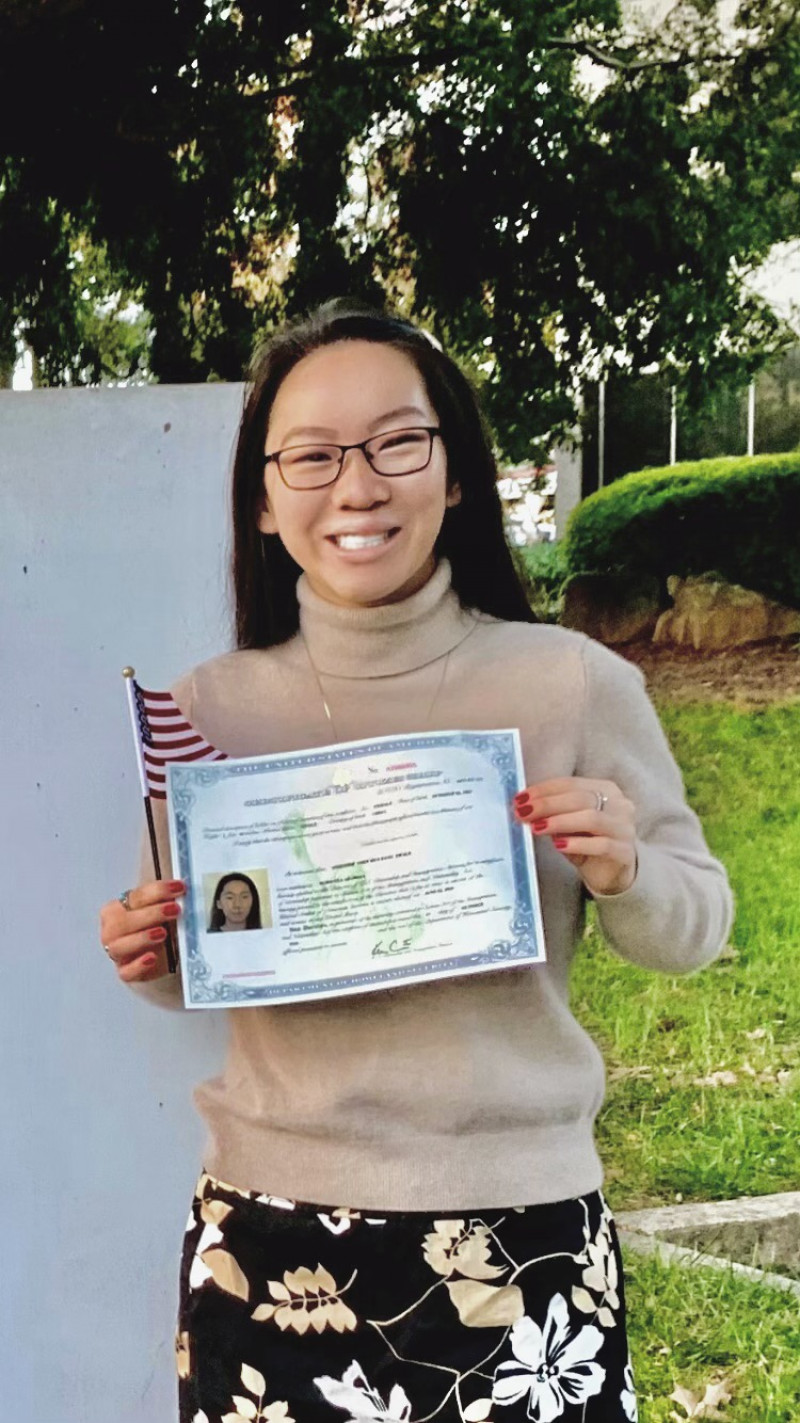 Ashleigh is an 18-year-old published writer who shares her experiences and is working towards becoming a politician. The responsibilities and impacts that politicians carry inspire her to be a leader that will protect groups from discrimination. Many can see Ashleigh's written work on notable outlets such as Thought Catalog, she exceeded over 1k shares on her "Why Slow Will Always Win The Race" article and continues to empower others in using their voices. You can follow her Instagram at ashleighewaldofficial, where her posts are authentic because of the deep captions and influencers engaging with her posts. A fun fact about Ashleigh is she enjoys using her social media as a platform for voting and immigration rights, social issues, and advocacy. Ashleigh has connected with many verified influencers who have shared her posts and follows. Ashleigh also loves to exercise while listening to music, and public speaking has never scared her. She hopes her story helps many see that they are never alone and anything is possible. Please follow and see her latest work.