Favorite Quote:
"Twenty years from now you will be more disapointed by the things you didn't do than by the ones you did do. So throw off the bowlines. Sail away from the safe harbor. Catch the trade wind in your sails. Explore. Dream. Discover." - Mark Twain

My tiny, five year old hands rotate the baby blue arrow. My family surrounds me. Sitting across the yellowish-banana table we are all seated at is my big brother, awaiting his turn. My parents sit next to me; mommy attempting to keep a smile on her face after just being thrown down a chute on her last turn; daddy looking as bored as ever. The arrow lands on five. I move my miniature, blond haired, piece of plastic five spaces over, and lucky for me, I climb up a ladder to the final space. I have just won Chutes and Ladders against my entire family. It’s not much of a win because the entire game depends on your spin, but for five-year-young me, it’s enough to light up my whole face.

Chances are you’ve played Chutes and Ladders some time between when you were born and present day. If not, the rules are simple. You spin that baby blue arrow, and the number it lands on is the number of spaces you move. If you land on the bottom of one of those blue ladders, guess what? You get to climb to the top of it! Sounds easy, right? Well, I forgot to add one detail. On the board, there are as many chutes as there are ladders, and if you land at the top of a chute, well, down you go.

Did you know that Chutes and Ladders was created more than 2000 years ago? Crazy, right? Well, Chutes and Ladders was first designed in India, 2nd century B.C. The original board game was called Snakes and Ladders, and was used to teach children about religion. The game taught moral lessons by representing the karmic cycle. The final square represented moksha (salvation) from samsara (the cycle of death and rebirth). A player would reach this point by climbing the ladders (which represented rebirth into higher forms of life by doing good) and falling down the board with snakes (which represented rebirth into lower forms by doing evil). Today, you can still see little characters doing bad on top of the chutes, and doing good below the ladders. The original game was first created with five ladders and twelve snakes, but when the British adopted the game they made the number of snakes and ladders equal. Nowadays, the game is widely popular, and you can buy it practically everywhere in the United States for about $14.79.

But would you want to buy the game? I would because it was always one of my favorite games when I was little, however, it’s not for everyone. Some people aren’t fans, including mom, who didn’t like it but still played with me.

“I never liked playing because the game was too frustrating. You would get so close to the end, and have to practically start over because you fell down a chute.”

“I always hated the game. It was just the same thing over, and over again. I found it kind of boring when I was a kid, and I still do.”

On the other hand, some people like the game, including me. I always loved the game. It was all about chance so, you couldn’t truly be sad if you lost, and you can’t exactly be bad at it. It’s all about luck.

Kenji, a thirteen year old classmate of mine also liked it:

“I remember liking it. I always just wanted to get to one hundred. It was kind of the only goal I had as a kid.”

Well, maybe you should buy the game, just to have your own opinion. Even though the game was created for younger kids, it can still be fun for all ages, including yours.

Recently, my mom got rid of the game, and sent it off to Goodwill. I hope the game means as much to the person who bought it as it did to me. 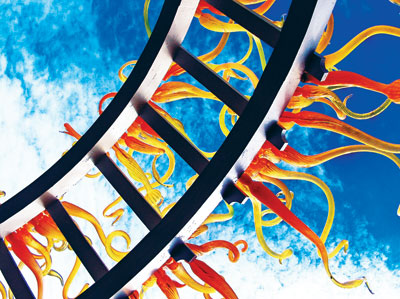 Chutes and Ladders was always one of my favorite board games as a kid. Turns out it's over 2000 years old!

Favorite Quote:
"Twenty years from now you will be more disapointed by the things you didn't do than by the ones you did do. So throw off the bowlines. Sail away from the safe harbor. Catch the trade wind in your sails. Explore. Dream. Discover." - Mark Twain