I was enjoying a chocolate brownie sundae at Glory Days when a group of three people caught my attention. They came in and sat down in a booth across from mine. It was an elderly couple and their daughter. The mom looked like she could have been in her late 50’s, with silver strands of hair poking out of a messy bun. Her eyes were icy blue and her long eyelashes accentuated them. She had a warm smile that made her seem like a grandmother who always had warm cookies for her grandchildren. She was quite plump and lively, unlike her husband sitting next to her. His eyelids drooped over his eyes making him look weary and he had a feeble, thin frame. He was wearing a navy blue trucker hat. I could tell it was his favorite because of the fade and the fraying edges. He was wearing a thin white t-shirt and torn, dirt spotted jeans. His skin was dark and sun damaged, as if he had worked out on a farm his whole life.
But it wasn’t the parents that caught my eye, it was their daughter. I couldn’t help but stare at her crazy ensemble. Her small black t-shirt allowed her belly to hang over her too tight leather pants that hugged all the wrong places. Black stringy hair hung on the side of her head in a high ponytail and short bangs laid straight across her forehead. She had bright eyes like her mom, except hers were hidden beneath layers of mascara and heavy eyeliner. There was bright red blush smeared across her cheekbones, making it look like she applied it in the dark. Deep brown lip liner outlined her plump red lips, looking the least bit subtle. Now this wouldn’t have been as bad if she was a teenager, but she was at least 25, definitely old enough too be able to read the sizes on clothing.
Their waitress came to take their orders. She ordered a Coke and a side salad. Extra blue cheese and some parmesan on the side, she added. Her voice was raspy and she had a southern accent. I imagined her being a bartender and an aspiring singer. A smoker, also. I could see her mixing drinks at some run down bar, daydreaming about one day escaping the place and becoming famous. She would start new trends with her wacky hairstyles and somehow make sloppy makeup become popular. A personal trainer would whip her into shape and she would be on the cover of Cosmopolitan and seen in the tabloids partying with celebrities.
The waitress brought out their orders and set down the salad in front of the daughter. She looked up at the waitress and asked for more blue cheese and parmesan. Well if there was one thing I could say I actually knew about this lady, she did like cheese!
I finally averted my gaze and finished my ice cream before it melted even more. As I got up to leave, I caught one more glimpse of the tacky-25-year-old daughter. Her bright blue eyes met mine and they danced as she gave me a big smile. She looked nice when she smiled, and carefree. I saw a bartender making it big in the real world. I gave her a smile in return as I walked out and thought to myself. Their waitress better keep the credit card slip that she signs, who knows how much it would be worth in the future. 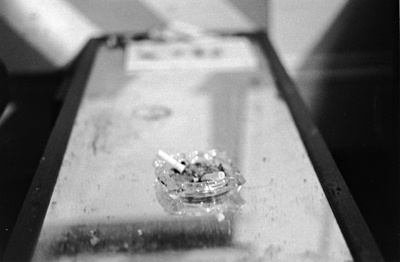 katrina15 said...
on Mar. 27 2009 at 2:15 pm
MARIAAA! i love this story your wrote. i remember you reading it in class and it is cleary the most amazing description of an ordinary situation. Your details about the elderly couple are so vivid I can cleary picture everything. Your verbs are beautiful such as averted or whip! I like how you put your own thoughts into the poem and it made it really personal. wonderful story!