When I opened the class door, a buzz of activity told me that the teacher was in. Entering as nonchalantly as I could, I took my seat and placed my bag beside me, opening it a second later to take out the bulky English textbook inside which was hidden an all-time favorite novel of mine, Uncle Dynamite.
It was evident that I wasn’t paying attention. My teacher droned ceaselessly for what seemed like two hours, during which I had read nearly half the book, then suddenly tried a new tactic and assumed silence. Distracted, I looked up only to find him staring intently as me, as if I were some focal point.
“Finnie, what is it that that you were reading again?”, he asked, and although I can’t blame him for it, a supercilious note did creep into his voice.
“Nothing, sir.” I tried the traditional technique. But he was not going to leave it easily today.
“Raise your hands and show me the book you were reading.” He replied, and since I had been done for, there was nothing else to do but handover the book to that esteemed authority.
I felt like Churchill handing over Derby to the Nazis. After all, the book had been a gift on my fifteenth birthday, and I couldn’t part company with it so easily. After lunchtime, I dropped at his office for a chat.
I was surprised to find him leafing through it. Being an English teacher, he probably didn’t find time enough to read what he was supposed to be teaching. It always happens. But he surprised me even more, when, on my asking back for the book with a lame excuse and an apology, he told me that he wanted to borrow it for a day.
The next day was pandemonium. I mean, that’s what you would normally expect when a teacher calls on a student to describe something for a change. It had happened before; in a tutorial, I was asked to expound on the role of courts and ended up having a lengthy debate with a person who it turned out I didn’t know.
But here, the topic was entirely different. We were discussing Uncle Dynamite, and the pandemonium was solely due to the fact that my teacher and I had opposite opinions on whether Pongo was a Don Juan or not. Like the encounter Lockhart’s class had with pixies in Harry Potter, the aftereffects and background sounds were being specially created by those members of the class whose ability in transfiguration extended beyond the normal limits.
And finally, after the meows and yow(s) had been silenced, we did our first real constructive job of the year. Writing a review on Uncle Dynamite and the light humor it carried. Students who didn’t have a copy were asked to lend or buy one, and their meticulous efforts even extracted a bit of surprise from the teacher. For Uncle Dynamite gave a sort of dynamic impetus to the class to set it off, resulting in a cacophony of views, with each more sinister and deep than the other.
Uncle Dynamite still remains a favorite with me. But the way it sparked urbanity in the hitherto crude sense of humor we all enjoyed, made it a favorite with others too. And I am sure when you get to read Pongo’s, Bill’s and Sally’s adventures with Lord Ickenham, you will feel a tingling to get something going. Better do something good, for blowing up your neighbor’s garden with a piece of fuzzy tablet dunked in water won’t do any real good, now, would it? 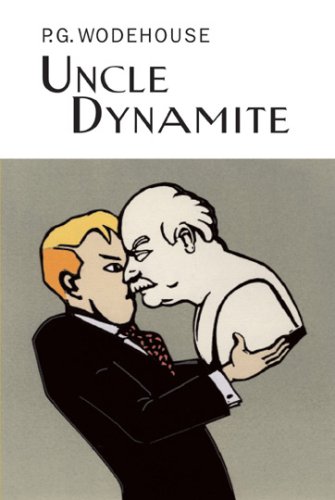