Confessions of a Cauc(Asian): Culturally Awkward

Favorite Quote:
"We accept the love we think we deserve".-The Perks of Being a Wallflower

I’m the person at the party who came with her friends, but somehow ended up sitting in the corner alone, again, self-consciously tugging at her sleeves. Feeling lonely, while twiddling my thumbs I look up to see someone standing in front of me. The person is always a cloudy figure in my mind after so many times. I accidentally mix blonde fuchsia-streaked hair with a short and stocky build, or green eyes with rainbow braces.

Either way, I’m finally rescued from my corner of isolation. We engage in polite conversation navigating our way through our favorite bands and colors, taking a detour into the topic of favorite YouTube channels instead of traveling into the realm of political opinion. Time passes graciously, but with few moments of silence while we delve into more “personal” matters.

I don’t know how, but we always end up in the “culture” zone. Sometimes we tiptoe and dance around in circles until our metaphorical toes start to ache and our tactful manner wears thin. Sometimes we dive straight in and get it over with.

Person: So, are you like, Asian?
Me: Yeah, I was adopted from China. Person: Cool! So do you like Chinese food?
Me: I like Americanized Chinese food.
Person: But you don’t like real Chinese food?
Me: I’ve never had it before.
Person: Oh.
(Insert awkward silence)
Person: Can you speak Chinese?
Me: No, but I’m taking Spanish II.
Person: Well, that’s nice.
Me: It is.
(End of conversation)

I don’t get upset if people ask me about China, or being Chinese, it’s just kind of awkward. I’m not really “immersed” in my culture. I’m not Buddhist. My family that adopted me is Irish. I can say Ni hao, that’s about it.

I’m sitting on an uncomfortable splintered wooden fence that just happens to divides my two cultures. 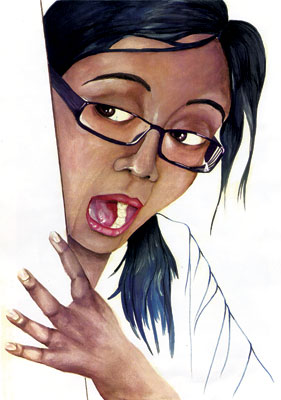 The author's comments:
I hope that a lot of people can relate to my situation.
Post a comment
Submit your own