She remembers the day her heart was broken, but she forced herself to get through. With tears on her face she walked down the halls; a hollow feeling inside. An empty silence that not only filled her heart but filled her entire body. She approached her friends, and when he saw her he stopped what he was saying. The bell rang, and students fled the halls, rushing to get to their classes. But he stood there, holding her together - keeping her from falling apart.
"Everything's going to be okay," he said, reassuringly.
She looked away, not wanting him to see her cry. For seeing her cry would upset him too, and that was the last thing she wanted.
"Hey," he said, touching her shoulder, then moving his hand up to her chin. "Everything's going to be okay," he repeated.
He lifted her head oh so gracefully, revealing her tear-soaked cheeks. She pushed away, looking downward, hoping he hadn't noticed.
But he had.
Because that was the first time someone actually told her the truth.
"It's not okay, I know," he began, "and it seems like it won't be either.
She looked up from the spot on the floor she'd been so carefully examining.
"But no matter how much you tell yourself you're over it, you won't be."
A warm tear rolled down her rosy cheek, resembling the same familiar glisten that hailed from his eyes.
"Don't cry hon, I'm not finished," he said with a smile, hoping it would be contagious.
When he realized it wasn't catching on he continued.
"You won't get over it until you really believe you are. Trust me I've been through this too. Don't lie to yourself, and don't force yourself to be happy. Accept what happened and accept that you can be on your own. You're a strong girl, and that girl doesn't let anything stand in her way."
She wiped her eyes with her sleeves, sniffed, and tried to smile. She tried to think of words to say, but nothing came to mind. They just stood there for what seemed like forever in the odd silence of the hallway.
"I'm so lucky you're my best friend," was all she said.
And she smiled at him, the first real smile she'd let slip through her lips.
"I'm even luckier," was all he said in return. 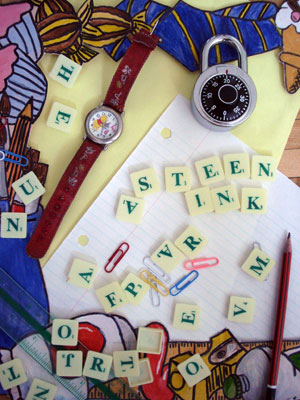 Favorite Quote:
Shoot for the moon even if you miss you'll land among the stars

Favorite Quote:
"Move on. It's just a chapter in the past. But don't close the book, just turn the page." ~ Anonymous

View profile
Wow! I was getting teary eyed while reading that. It's obvious that someone before this new 'boy' had left her heartbroken. The dialogue is what I think got me. that 'boy' has a way with words! ;)
watchblackfish said...
on Jan. 12 2012 at 7:33 pm
watchblackfish, Wayland, Massachusetts
0 articles 0 photos 2 comments

Favorite Quote:
"Someday you will look back and know exactly why it had to happen."

View profile
This is really good. Its really cute!!! please I would love it if you are anyone would read my memoir so please take a look at it. It's called "A Person to Laugh At" and I'd love you to rate it and comment on it so I get some feed back!!! Thanks
Hugs-N-Kisses GOLD said...
on Oct. 20 2009 at 6:41 pm
Hugs-N-Kisses GOLD, Alta Vista, Kansas
12 articles 0 photos 10 comments
View profile
If you are going to read a piece you should at least know what it is. This piece is a memior not a poem...that is why its published in the MEMOIR section of the website.
AmberA BRONZE said...
on Sep. 28 2009 at 10:35 am
AmberA BRONZE, Karachi, Other
4 articles 0 photos 12 comments

Favorite Quote:
Be yourself; Everyone else is already taken.
-Oscar Wilde.

Favorite Quote:
MY quote: "Without music, life would be absolutely pointless.... Music is my life and it always will be!"

View profile
I really enjoyed reading this piece of work. I like how you express the feelings and you use a lot of good word choice! Great piece!

By the way: I also love piano and like Coldplay! :)