Would You Like Some Blood With That? | Teen Ink

For two years Brett W, 18, had an average job: McDonalds. It did nothing for him except provide money. June of this year; however, the job would scar him for the rest of his life.

He never liked itâ€”not ever. The crabby customers, annoyed co-workers, and all the grease that sifted through the air. At the end of a shift you could literally squeeze the grease out of your hair.
“I would never go back there.” Brett said, visibly serious.
Brett ended up getting fired for too many absences in July. He had called in to say he couldn’t work the next day. Even though he couldn’t work that day Brett went in to McDonalds to pick up some lunch. They fired him right there. They said he was gone too much.
Even though he hated his job, when asked if he missed McDonalds, he said,
“Sometimes…yea.”
One of the people who Brett was sad to have left was his friend Matt. Brett and Matt frequently played around, pretending to punch and flicking towels at each other. Brett was washing dishes in the back one day when Matt approached him: bored. They started fighting and one of, what was suppose to be, pretend punches went awry and hit Brett in his right eye.
“Oh my God it’s bleeding, oh my God, Oh my God, Oh my God!” Matt started freaking out as blood started running off Brett’s face. The managers found out and he got sent home early to heal his injury.
“My girlfriend and family were really worried about me,” Brett said. He explained that even though the cut on his eye was bleeding for a while, no serious medical care was ever sought out.

The cut on Brett’s eye left a scar. That scar has been there for about six months and shows no sign of leaving his face.
“It was an accident, and we are still friends.” Brett hasn’t seen Matt for a long time, but when he does this incident will have no effect of their friendship.
Who would have known that one day at McDonalds could scar you for the rest of your life? 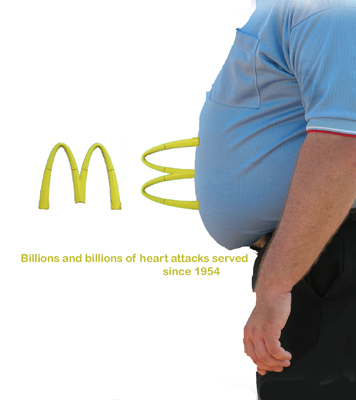