A drifter can have a boat upto 32 feet long and use up to three nets, each 50 fathoms long (one fathom equalssix feet). Usually there are two deck hands, though some crews have three.

Most drift boats have a reel and a roller to pull the three nets in. Thereel rolls the net up nice and tight; the roller just helps with the strain onthe reel when there are big loads.

Set netting is more difficult. Setnetting is fishing on the beach. Instead of using three nets, you only have one,though you can extend it 100 feet off the shore. Sometimes the set netters dobetter than the drifters.

On our set net site, we use running linesfor setting out and pulling up the net. The line is manually dragged from thebeach straight out to a pulley and screw anchor, and back to the beach at a45-degree angle.

The only time the set netters get to fish is when thetide comes in and part of the time when it goes out (until you run out of water).So, basically no matter what, they get only a few hours to fish.

Setnetters use skiffs to pick their fish, and sometimes they have to pick fish inthe mud, throw them in the back of the truck and haul them to the nearest waterto clean the gills or the tenders won't take them.

I've been fishing mywhole life. I started at the set net when I was eight years old, driving theskiff and delivering to the huge steel tenders. After working on the beach for afew years, I got promoted to work on the boat. Moving from the beach to the boatis like a vacation. 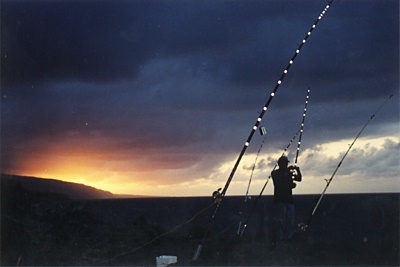