Everyonce in a while, if you're lucky, you get in touch with your psyche. I don't meanin a Sunday mass or a cloud of incense. Sometimes something natural - somethingmore pure than the ritual or the chemical - will rub you just the right way andspark a flame of enchantment.

For me, it was the power of words.

Iwas in a unique situation: sitting in the theatre at school with two pieces ofpaper in my hand and 30 people scattered in chairs around me. It was a poetryreading.

I'm not an actor - I've never been on stage - but there wassomething about my English teacher's invitation I couldn't resist. His requestwas simple: read any poem in any language. I didn't even have to memorize it,just pick something and read it.

I had been studying the poetry ofAntonio Machado in my Spanish class and liked his work. Written in Madrid beforeand during the Spanish Civil War, he described his country, his passions, hisjeopardized freedom. I had analyzed four short pieces and they all struck a chordin me, and since I didn't have anything else to do Thursday, I'd saidyes.

I knew as soon as I arrived that I was in for an out-of-the-ordinaryexperience. Stepping through the theater doors, I saw students reading aloud withteachers and standing in pairs, practicing for the performance. A few parents andEnglish department associates arrived; my mother came in 20 steps behind me,where I'd told her to stay. My nerves were shot already, and matters didn'timprove when Mr. DePeter sent me over to Mr. Mazzola, an Italian teacher straightfrom Milan, and Simone, a gorgeous Dublin girl who spoke French better than Ispeak English. They read with passion, clarity, persuasion. I mumbled some wordsoff the sheet I'd printed an hour earlier and tried not to stare at the text.Clearly, I was out of place.

But from the very first reading, it wasmagical. Simone opened with three poems - Patrick Kavanaugh's "Canal BankWalk," Louis Labé's "Oh! si j'etais dans ce beau seinravie" and a short piece in Gaelic. There was Mr. Mitchell, the Latinteacher, pacing the stage floor and ruminating, as all white-haired Latinteachers do, while he read, lecturing to the audience on Washington Irving and"Christmas at Bracebridge." There was Ms. DeRobert, the French teacherwith her charming five-year-old daughter - who sat silently captivated like therest of us - languishing on a Baudelaire piece. There was Jack Fermit, my oldarch nemesis, who read Victor Hugo as perfectly as anyone could.

I read"Anoche cuando dormia" close to the middle of the night. It was then,sitting on the stool at center-stage, that I realized just how wonderful it allwas. I adlibbed a biography, talked about fascism and Franco and artisticoppression under the new regime, but gazing into the eyes before me, I sawgenuine enthusiasm. My mother sat to the right and pretended not to know me, butI caught a hidden grin. The department head sat in the middle and smiled. Evensome girls seemed interested. I read slowly, carefully, expressively, and thewords came to life in a way they never had before. I can't explain it. Somehow, Iwasn't speaking anymore - I was painting dreams.

The night proceededsplendidly. There was Mr. Goddard, with the deep voice and youthful look my mommistook for the face of a senior, talking about jazz men just short of the bigtime and ten-year-olds just short on change. There was Mr. Bower, publishednovelist and poet, reading his best after 30 years in art, literature and love.There was Masha and Deanna and Amanda dying with Russian passion as they readabout war and soldiers.

There's something transcendent about hearingpoetry in other languages - maybe because you can't understand a single passage.It sounds ridiculous, but sitting there, the words themselves hardly seemed tomatter. Something inexplicable happened: we surpassed the corporeal. Each of uswas a companion in the pursuit of happiness, and letters became emotions,syllables, epiphanies; stanzas, passions. One man's writing conjures another'sthoughts, but in the language of visions and thoughts, the words themselvesbecome irrelevant. With a handful of words that night, we painted a thousanddreams.

They say the greatest joys come at the very moment you comprehendtheir evanescence: with the realization that bliss cannot last forever comes thepeace of mind which lets you treasure it. Mr. DePeter was always telling us thatin class, but for the first time, I really felt it. That one night, people fromevery part of my life shared a moment in time: my peers and my elders, my friendsand my enemies; my hopes and my fears. It didn't matter that in two hours we'dall go back to our separate lives, and by speaking English, keeping our poetryout of the soul and on the page. It didn't matter that we'd ignore each other inthe hallways and pretend we didn't know one another. It didn't matter that we'dgo back to the real world.

For the moment we flew in the realm of emotion. 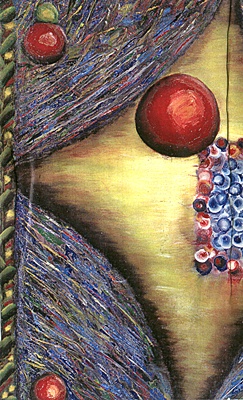 View profile
An absolutely beautiful piece. Your writing is exquisite and i truly connected with the text. I don't know if what you wrote is personal experience or if it imagined bit either way I'm a huge fan and it was really captivating.