Ten-year-old girls aren't old enough. You're not allowed to help us make dim sum, Tiffy," says my 18-year-old cousin, Jen. Then she strolls back into the kitchen to stir the stuffing and stands towering above all but one woman, Aunt Margarita. My grandmother's hands rock back and forth, kneading the hot opaque dough. Auntie Terri methodically measures out flour, bringing the measuring cup to eye level and brushing it against her reading glasses on the tip of her nose. Aunt Margarita, sitting to cradle the weight of her protruding belly after moments of standing, rests her elbows on the kitchen table and dexterously folds the dough into perfectly delicious, ready-to-be steamed dumplings. I long to be a part of this sacred art.

Magically, a year later, my grandmother, standing at the kitchen counter, beckons me over with sticky dough-covered hands. And I enter a new world. Jen's away at college and Aunt Margarita and her baby girl are out in sunny California; our four heads are on a level plane. My mother, her sister and her mom are all talking, gently teasing each other with the soothing music of three languages, Chinese, Spanish and English. My grandmother speaks mostly Chinese, then Spanish and sparse English. My Auntie Terri's remarks are dominated by Spanish, probably because, of all of her siblings, she has the strongest desire to return to her Papi's farm in the outskirts of Havana. I start with Chinese and Spanish, but end up using English for words I don't know, which are many. My mother holds the balance of the three.

All the chatter is accented with the sounds of my assigned job in the dim sum-making process. Usually people roll the dough out flat and then put the stuffing in, but my family doesn't do it that way. I put olive oil on my hands and on the tortilla press. I rip an eleven-year-old's size handful of sticky dough, roll it in a ball, drop it in the tortilla press, close and then squish. I proudly hand the flat pearly dough to my aunt for her to stuff. Then the dumpling is passed to my mother, who expertly seals them with tiny pleats. When we make enough, they go into the steamer for a few minutes. Then, it's time to eat the steaming dumplings.

This was the first time I was allowed into the women's territory. Now I'm always welcomed and enjoy every minute. I feel the greasiness of my hands, the squishiness of the dough, the warmth of the stove, and my family's love. 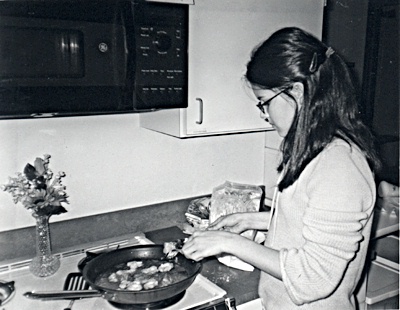