Nothing is the same. None of the priceless buildings of New Orleans function normally. Some of their pieces floated away in the water, along with the bodies, bodies of many helpless New Orleans citizens. On their rooftops they sat. And slept. And wept for hours. Their houses filled with water and forced them out, onto their roofs, with nothing. No food, no water, nothing. Except the clothes on their backs. Their neighbors, their friends, their family they watched float by, like they were taking a face-down swim in the canals of Venice. Helpless. With no place to swim to safety, they were stranded. Stranded with no place to go, nothing to eat, nothing to do, no one to help So they had no choice but to sit. And wait.

Until one day, the rescue boats finally spotted them. “Over here! Over here! We need help!” As they boarded the boats, a small sigh of relief was breathed. Well, at least they were off their roof, right? Sitting, and waiting. Waiting to be brought to the next place of shelter, looking. Watching the rescue personnel aboard their boat push bodies out of the way to get to point B.

“Ah, salvation, the Superdome is in sight! It’s a miracle.” The displaced citizens were relieved. They would stay in the Superdome until things were straightened out. But then a hole appeared in the roof, and the water poured in, into their place of refuge.

“So, what will happen now? What are we to do?” Wait. And wait for buses to come and deport them. To where? No one was certain. Out of this city was all we knew. Many were brought to the Astrodome in Houston, after waiting painstaking days for bus services. But some weak and elderly remained in the burdened city, in body bags. God bless them for their attempts, courage and power to struggle for life as long as they did.

New Orleans is left a swimming pool, with what’s left of houses moving along in its waves. The streets are left as streams with the debris floating along, no longer filled with children’s laughter, people talking, cars travelling. They are left with nothing, nothing but water from Lake Pontchartrain. 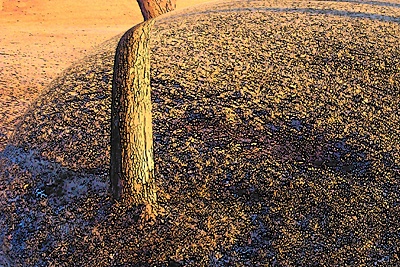