Two years ago, I won a scholarship to the Sally Ride Science Camp at Stanford University. It was an extraordinary experience and I wanted to return the following year, but there was a problem: I would need $1,000. Is there any way for a junior-high kid to earn that much in one summer? Yes - I found an unusual way through 4-H by raising a pig to sell at market. In 2001, a Grand Champion pig sold for a record breaking $135,000. Thinking this would be easy money, I plunged headlong into my swine project.

Most kids know that pigs are adorable creatures with little ears and clean snouts. I discovered they believe in neatness and make a genuine effort to do their business in just one corner of their pen. Even though they may smell a bit (you get used to it quickly), they are extremely smart and have the sweetest and funniest personalities.

When I first met my pig, I knew she was special. Millie was reserved from the minute she got off the truck. We would be keeping her as well as a male, Mr. Oinks. As we approached the pen, an explosion of straw, grunts and snorts revealed a small, muscular pig who burst from the hay where he had lain for five days, totally lonely. It was love at first sight between them. Mr. Oinks stood thunderstruck in the middle of the pen while Millie seemed to wonder, Who is that good lookin’ guy? It was clear, right then and there, that they were meant to be friends.

For the next few months, I did my daily duties with the help of Mr. Oinks’s owner. I fed them, cleaned the pen, and trained Millie to respond to a cane so that when I lightly tapped the cane to her cheek, she would go in the direction I wanted her to move.

Millie loved her daily walks that strengthened her muscles and helped her lose some excess fat. We had to build her stamina for Youth Fair where I would prove that I could handle her and show the judge the “right moves.” Aside from obedience and showmanship training, I had lots of fun getting to know both pigs. Mr. Oinks quickly became The Oinkster with his comical snorts and grunts. He prided himself on being the dominant one and assumed that pushing others around came with the job description. Millie, however, always thwarted his attempts to hog the food bowls; whenever Oinkster chose to push her from her eating spot, she would saunter over to the other bin and continue her dinner.

Pigs usually like their tummies rubbed, and Millie was no exception. When I rubbed her big belly, she would lay down and roll on her back in delight. The Oinkster wouldn’t be left out, so he’d roll over and beg for tummy rubs, too. He was such a sweet pig.

When July finally rolled around, it was time for the Youth Fair. Millie and all the other livestock stayed in a huge barn. The day of the show, I nervously washed and cleaned Millie, donned my whites, and waited by the entrance to the show ring for swine members to begin showing.

Then it was time and I slowly walked along, crouching by Millie in the proper show position and directing my pig to display all her sides to the judge. The crouching is very uncomfortable and by the time awards were announced, I was exhausted. To my surprise, I placed second and continued on to the next round. Eventually, I was in the championship round, where I competed against kids in the senior division. By then, I was totally exhilarated I had gotten this far. I placed fifth out of 53!

Millie was a champion! She had worked so hard to cooperate, and I was so grateful for her perseverance to stay with me. She returned to her pen so tired that we had to bring her water. I was glad I had spent so much time working with and training her to be strong.

I felt very lucky because I found a good buyer for her. I had an an emotional farewell with Millie. I stayed with her right until the end, not wanting to let go as the men took her away. I still miss her, but I know that next year I will get another pig, hopefully with as rich a character as Millie.

How does that sound for a summer job? 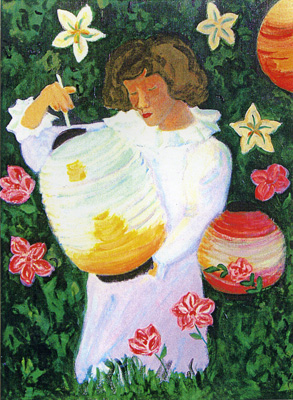