A new table of four, easy enough; get them their water before they complain. Table six still needs pie. What was it now, apple, rhubarb, apple a la mode unheated, and raspberry peach? Did they want ice cream with the raspberry peach? I could have sworn they did. Hmm.

Spilt water at table two. Kids are so cute until they make a mess. Okay, four glasses for the new table, a rag to drop off at table two. What else do I need?

“I’ll be right with you,” I reassure. Fake smile, Sam, you can do it. Just smile and all will be well. Cigarette smoke always finds its way to my nose. That, combined with the smell of grease and the special of the day, gives me headaches all the time.

I got my first job the summer before sophomore year. It seemed perfect: I would be a waitress, someone who was always smiling, beloved by customers, and most importantly, made a ton of money. It was a great dream.

It was wrong from the beginning.

“We’ll start you off washing the dishes. Everyone needs to be a dishwasher before they can waitress.” Her smoker’s voice was all I could concentrate on. That, and the pound of make-up she had poured on her tiny, wrinkle-infested face surrounded by a curly blond wig. Her foundation was too dark for her complexion and oh, that eye-liner! It couldn’t get any darker, and when I saw her toward the end of her shift, it had run halfway down her cheeks, making her look more like a funny football player than the owner of a restaurant. I ignored the obvious oddities, smiled and thanked her for the job.

That first summer was unforgettable. It was like a sauna in the kitchen. The heat was the only guarantee of what each day would bring. Well, that and the nauseating smell of the food. Don’t get me wrong, the food is great and everyone always comes back, but when you work there, you see the food before and after the customers have enjoyed it and believe me, it gets to you. Before it’s raw and frozen, inedible and sometimes even unrecognizable. Afterwards, gross! It’s like a giant stew forming in a bus tub, a nightmarish combination of chicken bones, cold and chunky mashed potatoes topped with straw wrappers, soggy French fries soaked in ketchup and every other liquid available floating around, and don’t forget dessert - pie crusts surrounded by ice cream, drizzled with cigarette butts. Yum!

I remember one of my first days: I had to be there in time for the breakfast rush. As I exited the kitchen where the cooks were barking orders, sharing their own lack of sleep and grouchiness with the world, I entered a new realm.

The waitresses were running around filling orders and I was amazed. There was chatter everywhere. In the kitchen the only sounds were something sizzling, the clanging of plates and the loud, high-pressure water faucet. Out here it was all conversation. Interesting people were talking nonstop about the weather, car shows, gardening, everything, and they were all together in this room, happy and eating. What a wonderful place, no? That’s where I wanted to be, not the kitchen.

That’s when I noticed this guy sitting at the bar staring at me. Obviously a regular, he drank his coffee like he owned the place. His eyebrows did this thing that still sends shivers down my spine. An attempt to flirt, perhaps. Their up and down motion was extremely disturbing. So I did what was polite - I smiled, grabbed a full bus tub and headed back to the sauna, relieved to get away.

I returned a few minutes later, having forgotten about the guy. Another tub was full so I headed toward it, close to where he was sitting. He stared at me again and my face grew red. The heat was causing sweat drops on the crest of my forehead and the look he sent me caused the heat to reach me faster.

“Wow, you’re gorgeous. You could be a model! Look at those eyes, I bet you have all the farmer boys after you!” He was gloating, and I was freaking out.

“Um, thanks,” I managed, but let me tell you, I left quickly.

He was old and old guys shouldn’t look at or talk to young girls that way, if you ask me. I hid in the kitchen for a long time. I peeled apples and helped the cooks until I was sure the guy had left. He could easily have been my grandpa! Ew.

But that’s the weird thing about my job. I have learned that if you’re going to be successful, you need to know how to flirt. It’s not a bar, so you don’t dance around in tight shirts and shorts that could pass for underwear, but you do need to know how to bat an eye. Here’s a fact: we don’t give a senior discount. You want to know why? Every customer who comes in would be able to use it. Seniors are who we serve. Believe me, there is nothing like flirting with old guys!

One time I came to work and the cook told me that four regulars had been talking about me and the other waitresses. He claimed they were sharing how hot we were and wondering if we had boyfriends! I couldn’t believe it. These are people I have to deal with every day, extremely ancient people, and they were curious about that!

I finally did get out of the kitchen. Two months into the job, I was promoted - or demoted, depending on how you look at it. The job got much better, but the wages decreased by 50 percent. Ha. I made my dream, though, I began to waitress and I did my best to please all the demanding folks.

I think the customers felt bad for me in the beginning. Each of my tables was informed that I was “in training” and guess what that brought me - bigger tips! Yup, I made a bundle on messed-up orders, spilt coffee, forgotten drinks, milkshakes on my shirt, and just plain idiocy. All I cared was that they were tipping.

As the months passed, my skills increased, along with my cleverness. For example, I learned to wear two shirts in case the ketchup decided to squirt, or the malt machine had a fit and suddenly left me wearing polka dots. I also learned to smile, no matter what! The customers may appear crabby, but there’s still a chance of scoring big.

Okay, I have to admit, they aren’t all that bad. There are a few who actually help me get through the day. Just by showing up, they make the time whiz by. My problem is that I’m terrible at names.

“Bet you anything, it’ll be green tea for her, coffee for him, a hamburger and a patty melt with fried onions,” I predict. That’s how I know them, by their orders, however normal or strange. Conversation is kept to a minimum. When it’s busy, only pay attention to the orders.

Bet you didn’t know this - not only do I get to fake my smile, bat my eyes and use my flirty voice to entertain and serve interesting people, I also get to work with your not-so-average people.

Two of the morning cooks, sweet as the pies they bake, have such strong accents I seldom understand them, which is not a good thing because they think they own the place. Just nodding and smiling doesn’t work with them, they talk faster and get sulky.

During the last two years, I have met a few employees who were almost scary. This one lady, her glasses were as thick as a brick. I don’t even know how she could see through them. Her hair was as greasy as the French fries we serve, and I always wondered if she showered. Food and gunk, maybe even mold, were embedded in the pores of her skin, in the corners of her lips, under the folds of skin where her pointy nose and pale skin overlapped. She would talk constantly with her mouth full and brag about her one-night stands. Okay, she wasn’t scary, just plain disgusting!

This place has bad luck when it comes to hiring guys. One guy they couldn’t let work alone for fear that he would steal from the register. If we got busy, his face would turn red as raw meat. I learned lots of curses from him! Things were thrown around and the kitchen became hell. He was quickly canned. Yup, and arrested, too. They came into the kitchen during our busiest time and handcuffed him. I wish I had been there. I always miss the exciting stuff.

Like most, my job’s not perfect. It has everything I don’t want: people who tick me off, food that makes my stomach churn, a boss who is constantly breathing her smoky bad breath down my back, customers who like to complain, and not enough hours. But I do get to work with my best friend once in a while and the money isn’t terrible. Plus I absolutely love waitressing. No matter how bad it is, I still love it.

So, come on in, have a seat, be happy and share a grin, and I can guarantee that the smile you see on my young face will be real. The food is superb and the people aren’t bad. 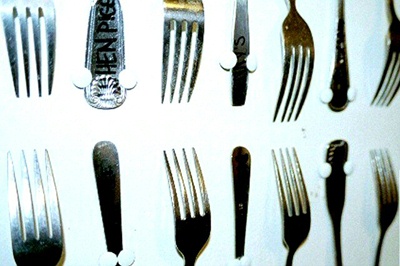