Favorite Quote:
New Moon - S. Meyer
'I flung my leg over the edge and ram through the knee deep water, it sprays all around me. "Edward!" I yell knowing it is useless. The crowd is too loud and my voice is breathless with exsertion. But I couldn't stop screaming.'

It was a dark merciless morn, when the three shepherds were out to guard they’re herd of hundred when the found but one orphaned lamb. To their surprise the lamb had, the only once seen, black wool. They all marveled at the beauty of the rare finding. Then they pondered each one thinking the same thing, none of the sheep of the herd had any speck of dark history, white wool was all people wanted to buy. So black and discolored wool was eradicated from the breeding pools, or so they thought. They gated the herd and took the lamb home right away to show it to the people of their village. The wisest elder of the village heard the news of the black sheep and soon found them in the eatery tent of the village.
“That be the lamb of riches! Just one pound of his wool would be worth hundreds. But be aware, black sheep are thought to be a ‘very’ bad omen.”
The three young shepherds ignored every word of the old man, except for ‘ lamb of riches’. The youngest shepherd spoke up. “We name him Negro, because his wool so soft and black. This small black lamb, Negro, could be the best thing to happen to this village in decades!”
“Or just the opposite!”
These harsh words came from the wise elder of the village and the young shepherd boy knew to obey and listen to him for he was an important part of survival to this village and without him they could all surely die. The shepherds took the lamb to the goats to feed as they went to continue they’re work in the fields. Over the next couple of months the lamb grew and grew. Finally he was a full-grown sheep and now summer was upon them. Time to clip the great many sheep and sell the wool at market. Immediately the three shepherds headed for Negro, they’re prize sheep to sheer his wool but the wise elder stopped them.
“You three shall not sheer this sheep till last day of summer!”
The oldest shepherd stepped in.
“But Wise Father Moco you must surely know that summer brings rain. The rain makes mud and that will matt his soft black wool. It’ll be worth of nothing to us then!”
“Than let that be so. You will see, with time comes age and experience.”
Then the middle shepherd, the shyest of the whole village asked. “Must we wait till end of summer to sheer all of the sheep?”
“Of course not, unless you three decide to do so. Oh, and I recommend selling the wool at the end of this years fall, not right after we sheer them in summer like we’ve been doing these previous years.”
Never before had the wise elder suggested such drastic changes in the *Oro village’s daily and yearly traditions .The shepherds decided to take the matter to the wisest woman of the village, Mother *Sabemo. The three brothers shepherds had lost they’re real mother and father when each one of them was very little, the oldest brother was only 7 when they’re mother and father both died. He was left to take care of his 3 and 5 year old brothers. So Mother Sabemo and Wise Father Moco took them in and have taken care of them for the past 10 years.
“ Well boys it seems to me it’s going to be a terrible winter this year. Remember, ‘*no tengas como vano el consejo del anciano.’
“But….”
“Shh! *El silencio es oro.” They left her tent to think of what she said. Both her and Moco said the same thing ‘experience’ must be the key to unlock a future livelihood. 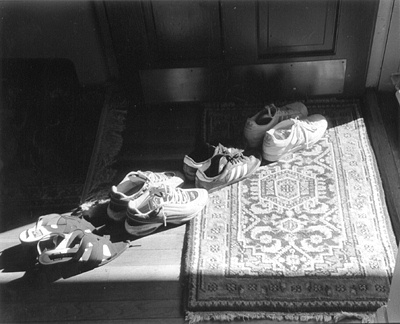 The author's comments:
I wrote this piece after my great grandmother bought a sheep rug over in Europe. It was going to be a book but I got stuck and decided to leave it an unfinished short story. I left the ending untold so that the readers get a chance to share their idea's with one another on what would be the ending if it had one. So I leave it up to you to decide what comes about in the end. Let your minds' wander free, share you idea's freely and keep open minds.
Post a comment
Submit your own