Did you know that over 218 million, MILLION children are child labourers, of which 6.15 million are in bondage, technically slaves. They have some of the worst jobs, from having to squat for hours on end, sometimes for ten to twelve hours at a time, to packing gun powder into canisters, a hazardous job should a single spark ignite and an explosion rip through the factory. They are even shackled to the carpet looms, weaving tiny little knots for carpets that will be sold for high prices on the market. Others are domestic servants, or a variety of other tedious, low paying jobs. Paid pennies a day, two or three cents, these children are mutilated or killed if they try to escape the factories. Can you imagine having one your ears sliced off, being murdered or raped for trying to escape such a bad place? Now the kind of ‘child labour’ I am talking about is any child under the age of fifteen who endures and provides physical labour that is intolerable, harmful, and subjects the children to physical destruction and sexual abuse. It is called Bonded Labour.


We must ask, how did these children get into the labour? Some are tricked by the factory owners who say that they and their family will get enough money and care. The children go along, thinking that all will be ok, and before you know it, they are shackled to carpet looms or locked in a gunpowder room. Some families become indebted to factory owners, often promising their child’s labour in order to pay for a wedding or as a mortgage.

These children will often find it impossible to get out of the labour, unless liberated. They are charged for their food and roof, often inflated to many times its street value. It is often that these children are paid less than they need to even pay for the food, so they become more and more in debt. Others are abandoned on the street as very young children, and brought up as child workers in domestic homes, or in service areas, like hotels, often only working for their food and the roof over their head. They essentially become the “employer’s” property.

Now that we know the problem, we must find an answer. That answer is schooling, heavier laws against child labour, and most importantly, AWARENESS. If they can go to school, they can get proper jobs to care for their families, and stay out of the factories. If there are laws, workplaces will be safer, proper wages doled out and children will not be able to be taken advantage of. But the most important thing is awareness. If there is awareness, there is change. Change will be when every child goes to school, getting the education they need. Change is when every child can play, be a kid. We can help achieve this goal by boycotting companies and manufacturers who use and therefore support child labour. We can write to those companies, demanding that they change their practices. Did you know that the chances are, you are wearing a product of a child’s hands? This must be put to a stop. As a global economy, we spend billions of dollars a year on unnecessary things, like 14 billion dollars a year on cruises, 18 billion dollars a year on makeup and 40 billion dollars a year on golf... Yet politicians claim that the world wouldn’t be able to scrape up the 12 billion it would cost to set up schools in impoverished places that need it the most. Places like Pakistan, Asia and India are some of the biggest places for child and bonded labour. We are the children of this generation. We must speak up for our peers. We can support causes, fundraise and write letters to help end child labour. Even appreciating being able to go to school will help, don’t take it for granted. We can check the tags on the clothes and items we purchase, if it’s manufactured in a developed country, like Canada or the USA, it won’t have been made with child labour. There are companies which have promised not to use bonded child labour and give all workers fair wages and working conditions, like Fair Trade Company and World Finds.

You may not think that any of the places that you buy from use child labour, but think again. Nike, the popular sport equipment retailer was recently found to have been using bonded labour. Wal-Mart is another player in that area. Gap, Mattel and Adidas or any number of ‘normal’ products may be produced by children, depending on which factory the jobs are sub-contracted to.

Like Martin Luther King Jr, who had a dream, so do I. A dream that every child will be able to go to school, that none will face the horrors of the bondage factories, that they will have rights to a safe childhood.


Think about what YOU can DO. 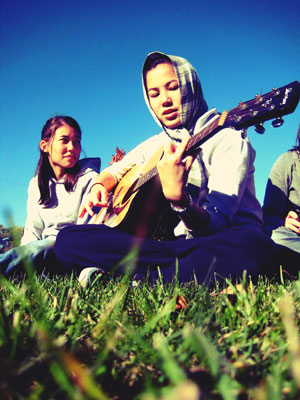