The media has become one of the main problems in society for teens. It has the power to influence many things, most of them being a negative impact which leads to countless social turmoil. Some of the main distorted opinions the media have fed to teens are: opinions on violence, relationships, and body images. Since the media’s start it has been increasing in its influential power and its long lasting affects. It’s one of America’s biggest problems since its start in the twentieth century due to it’s interference with families, the church, self image, individual’s opinions, and all of the above.
Roughly in the 1950s the magic box called the TV was becoming a common place household item. They where yet another major addition to the rapidly growing world of the media. By the time the TV was begging to infest people’s homes, radios and phones were already firmly planted in individuals daily media use. For the majority of the twentieth century the media was not a problem. Children and teens where raised knowing self control , and parents were easily able to watch their child’s media intake and it’s effects. But now, in the Twenty-First century, plenty has been changed. We now have computers, cell phones, iPods, internet, social networking sites, email, personal laptops, video games, radio, and countless other things. What started as an innocent technological step forward has now turned into our daily support and need. Now teens are freer than ever to indulge themselves with the world of the media in several different electronic screens.

Many researchers have made the same shocking statement that teens, on average, spend over seventy-two hours a week on several different electronics, the majority of this time being the TV (Cnet, 2010) In another study by two college professors that consisted of 1-on-1 interview with teens, Heidi A. Fuller and Amy M. Damico concluded, that the majority of teens preferred action packed violent films and video games over all others. But many of the teens confessed that the violence in media influenced them to believe that it was “okay” to express violent behavior because the media made it look “fun” and “normal” to express violence. One female student said, “ I think some do because they show a lot of-not even horror films, but just films that have a lot of abuse in them, stuff like that, that show kids sometimes it’s okay to do them, and it’s not, and they thinks it’s ok.”
Another female student said “Yeah it’s like some of the video games, some of the video games are over exaggerated, like there is a lot of violence, especially when they’re young, like my brother, he’s seven years old and he’s been playing those games for at least three years, and it’s like I hate that he’s so aggressive.” Most male students didn’t see a link to violence in the media and violent behavior. (Heidi A. Fuller, Jul/Aug 2008)
“This generation is unique, teen life has become a theatrical, self-directed media production.” (Cnet, 2010) Many will have to agree this statement once said by Jim Talor, Vice chairman of the Harrison group. This generation of teens was raised with the daily media intake being a normality. One of the more heavily implied worldly opinions that the media tells teens is that sex before marriage is normal, along with teen relationships, teen pregnancies, and all provocative behaviors are expected from teens. What the media is saying to teens and children is not okay or acceptable, yet it is now the common expectation and profile of an American teen. The media has discarded anything to do with the sanctity of marriage and replaced it with the now all too common implied thought that we must seek pleasure and not responsibility.
Along with the distorted view of relationships, another negative affect the media spits out to teens is the view of body images. One girl at the age of sixteen said, “They have ads of how you should dress and what you should look like and this and that, and then they say, 'but respect people for what they choose to be like.' Okay, so which do we do first?" (Media and Girls) In a study of over 10,000 teens the results where this:
•
About a third of both boys and girls reported often thinking about or desiring toned muscles.
•
About 12 percent of boys and 8 percent of girls had used potentially unhealthful products in the past year, and about 5 percent of boys and 2 percent of girls used them at least weekly. The most popular supplements reported were protein powders and shakes.
•
Slightly less than half of boys and a little over a third of girls described themselves as being happy with their bodies. (Goldstein, 2005)
Since this study was taken the percentage of boys and girls unhappy with their bodies has increased. The eating disorder due to being unhappy with their bodies has increased and it will all continue to do so easily and without mercy.
This generation (and future generations) of teens will never shake off the media’s affect on them. The media is filtered in every minute of the day of their lives and has altered their thinking process and opinions. Dan Anderson who directs workshops and studies about the growing media said, that that the constant addiction to the media will increase negative effects on social behavior, health, education, and cognition (e.g., increases in aggression and obesity, interference with reading, increase in problems with attention) (Board on Children, 2006) Education has already decreased, teen’s motivation to be active in responsibility has already decreased, and everything still continues to decrease. If people are saying it’s a major problem now, then just wait. It will soon be a shattering crisis of our own making. The media continues to grow and teens continue to watch and soak it in. Since it started it has influenced violence, relationships, teen body images, guy/girl role playing, teen’s confidence in themselves, and more. In short, the media is going to be a never ending problem for teens and people general. Now is the time for people to shut off their TV’s and say, “Enough is enough.” 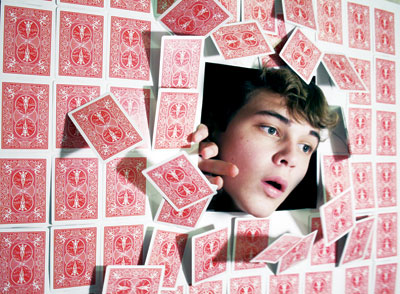 The author's comments:
I know every one of our oppinions are different, (that's is what makes us human) But I think one thing we can all agree on, is, the media is taking to much control over our lives. I has the power to destroy....
Post a comment
Submit your own