Favorite Quote:
The strike of change will only come later.

The Israeli-Palestinian Conflict has a significant role in the history of mankind. War has engulfed this conflict as more people suffer. The longer this will go on, the more violence. Both sides are at fault. Israelis have been killing and bulldozing houses of innocent Palestinians. While, on the other side, Palestinians have had many chances of peace, not excepting even one. As time passes by, people will suffer. This war is a fight for territory.

- 1947 CE: United Nations comes up with a plan for splitting the disputed land into three states; Gaza Strip, Palestine, and Israel.

- May 14, 1948: Israel Declares Independence from the British

- 1969 CE: Yasser Arafat gets elected for chairman of the PLO

From 1517 to 1917, the Ottoman Empire ruled over an area that at the time, was called Palestine. This fraction of the vast Ottoman Empire was part of the Damascus Province, containing mostly Arabs, but also a few Jews.

In 1897, Jews in Europe started to create the Zionist Act, an act for making Judaism not just a religion, but a nationality.

The Zionist act was established mainly because Jews had been treated harshly in Europe. Anti-Semitism was one of the worst genocides of all time. Millions of Jews were discriminated against.

Now, the Jews wanted a land to escape to from Europe, to live in, to grow in. This land they chose was not unfamiliar to them at any rate.

The Jews had an ancestral home which was called the Land of Israel. This was the area of Palestine, but of a long time. It was split into two parts, Israel, and the Kingdom of Judah. From 1523 BCE to 69 CE, the Jewish people in the Land of Israel had been under Babylon, Persian, Greek, and Roman rule. During these rules, the different rulers had different opinions. Some helping or some fighting Jews. Before all of these rules, the Egyptians had taken Jews as slaves.

In these times, Jews were so subjugated partially because violence had been brought upon them, especially by the Romans. The Christians also believed that the Jews had murdered Jesus, not the Romans, and in all of the places that the Jews have been, they have been the minority.

After all they had been through, they chose to exile to Europe. Jews that went to the Iberian Peninsula were known as Sephardim Jews. The Jews that traveled to the Danube Valley and Rhineland were called the Ashkenazi Jews. Some even went to Russia.

After the Jews left to Europe, the Land of Israel was named Palestine by the Romans.

The Jews had gone through a lot in the Land of Israel, and now, they chose to move back to their ancestral home and start a new life.

At the time of World War I, the Ottoman Empire was weakening and starting to fall apart.

On November 2, 1917, the British Foreign Secretary Arthur Balfour sent a presumptuous letter to the British Jewish community leader Walter Rothschild. This was the Balfour declaration. The letter was promising the Jewish people a home in Palestine while also warning that nothing shall be done to prejudice the existing non-Jewish community in Palestine.

As suspected, after World War I, in 1917, the Ottoman rule fell. This gave Britain a chance to interfere, turning Palestine into British Mandate. As Jews kept on pouring in, the British started to limit Jewish immigration. Protests started as the Jews wanted their immigration. In very little time, it got worse, leading to violence.

From 1941 to 1945, one of the worst genocides in history happened; the Holocaust. Nazi Germany murdered 6 million Jews in Europe, two-thirds of the Jewish population. Now, there were thousands of Jews fleeing Europe to come to their ancestral home.

In 1947, the UN came up with a plan to attempt to solve the plan. They split British Mandate into three states. Israel (for the Jews), Gaza Strip and the West Bank (for the Palestinians), and Jerusalem; an international city.

The day after, May 14, 1948, Israel declares their independence from the British.

This broke out into the Arab-Israeli War (1948–1949). This war was a big bloodbath. 700,000 Palestinians fled their home to go to safer places. This war included mostly Palestinians who died.

After the war, Israel took over all the disputed territories. That was except the Gaza Strip (controlled by Egypt) and the Western Bank (controlled by Jordan) — including Jerusalem’s eastern quarter. This was a big loss for Palestinians.

Those 700,000 Palestinians who left their home and turned into refugees, their descendants today, are about 4.5 million Palestinians. They are waiting for some miracle to happen.

In 1964, the Palestinian Liberation Organization formed. This was also known as the PLO.

After many back and forth military strikes from Israel and its neighboring Arab countries, Soviet intelligence reports that indicated Israel was planning a military campaign against Syria. In the year 1967, there was a major six-day war. This war consisted of the countries Egypt, Jordan, Israel, and Syria. After the war, Israel took the West Bank, Gaza Strip, Golan Heights, and the Sinai Peninsula. Since many Arab Palestinians had also fled, many Israelis moved into these newly occupied territories. This was considered illegal by the UN and the International Court.

Then in 1969, Yasser Arafat is elected as chairman of the PLO.

In 1973, there was the Yom Kippur War. The war had started when Egypt launched a sudden attack on the east bank of the Suez Canal. Also, at the same time, the Syrian army attacked Israelis at Golan Heights. The war broke out, leading to many deaths. Finally on May 31, 1974, Israel and Syria signed a ceasefire agreement. Yom Kippur is named after one of the holiest Jewish holidays; The Day of Atonement.

Anger still rose. Palestinians wanted their peace and land back. From 1987 to 1993, violent boycotts and protests started to take place. This was known as the First Intifada. The word intifada in Arabian means “shivering or shuddering”. Israel’s reaction was by killing and deporting the Palestinian residents in Israel. After universities closing, mass arrests taking place, the Palestinians slowed to a halt.

In 2007, Hamas formed in Gaza. Attacking Israel very often, Hamas is a Palestinian terrorist group formed for the destruction of Israel, using Gaza as their base. Israel’s response to all this violence was putting Gaza in a military blockade.

What Should We Do?

All of this history makes the situation very difficult. What should we do? There have been about five Israeli offers to the Palestinians, putting peace on the table, but the Palestinian Arabs keep rejecting them.

There is a one-state solution where Palestine and Israel are one state. Those who consider this solution, see separating Israelis and Palestinians too hard. But, there could also be racism, riots, and more that would slowly chip off the foundation of peace between the two communities. What could the government be? The government could have two parties, representing Israelis and Palestinians. They could work together to form a fair and just government. But the one-state solution would also eliminate the world’s only Jewish state. Israel may not find this acceptable.

The Prime Minister of Israel, Benjamin Netanyahu, is the leader of Israel’s right-wing who accepts the two-state solution. The two-state solution would create two separate states for two peoples; Israel and Palestine. Then, there would be a Jewish state and a Muslim Arab state. But, what would happen to Jerusalem, an international city, important to both states? Jerusalem could still stay international, not belonging to Israel or Palestine alone. Riots would be less likely because Jerusalem is a holy city for Jews and Muslims. What would happen to all these Palestinian refugees? They could move into the Palestine-controlled area. The Palestinian government or even the Israeli government, as a form of respect and a symbol of peace, could fund homes for these Palestinian refugees. But, what about the Jewish settlements in the West Bank? This is when Israel might need to also fund more homes, but for their own people.

On the other hand, would Palestine give in? They lived here before the Jews came in from Europe. Would they give up their land so easily? Well, considering their loss of land, they might actually want to. There might finally be some peace. But, it wouldn’t come so easily.

So far, a solution might seem like a fantasy. The Palestinians and the Israelis both would need to agree on a solution. There are so many choices but fewer possibilities. Lives depend on this, and we need to try to make this firm. 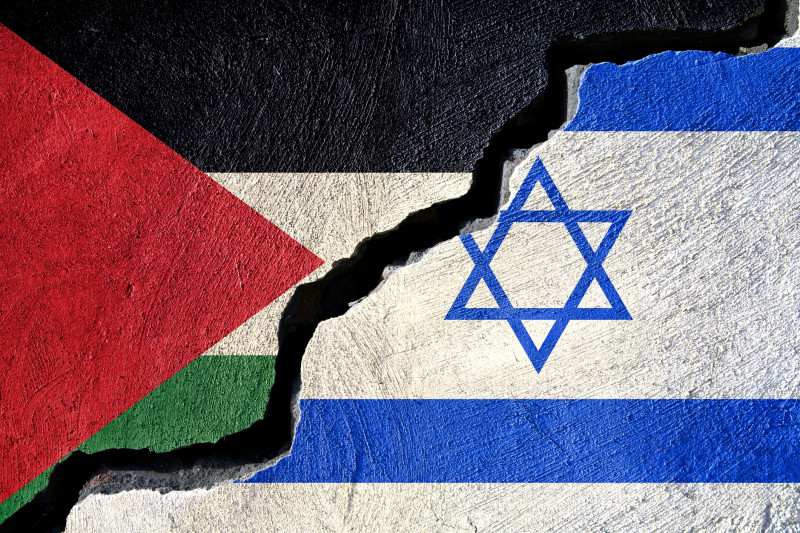 This conflict is devastating in terms of fighting and war. It may be hard to solve, but there is always a way.