Hurricane of a Perspective | Teen Ink

Hurricane of a Perspective

When people think of hurricanes, they see a massive storm. When I think of hurricanes, the prospect of no school is the only thing that comes to mind. Only during the storm itself, do I come to the realization that people may get hurt out there, or lose their houses. I look at it through a narrow viewpoint, only looking to see how the storm affects me. However, the prospect of several days, or even a week without school is always enjoyable. I envision days of joy, relaxation and laziness.

I went to bed Sunday night, joyous about the fact that I had no school the next day. At the time, the full force of the hurricane had yet to hit. My bones were excited; I wanted to see the wind swirling and the water falling. Much to my dismay, it was so dark out I couldn’t see the storm. I went to bed in high spirits.

I woke up feeling powerless (Haha, you get it?). Well, that’s not completely true, seeing that I have a generator which backs up heating and important lights. At the time, I felt great. There was no school! Who cares if there wasn’t power? I spent my whole day doing nothing. I just kind of lazed around. Internet was down; I was lost without it. What can I say? I'm a product of the twenty first century.

By the time we hit the fourth day of no power, I was dying. My head hurt from being so bored, and I couldn’t contact any friends. AT&T phone service stopped working; I had no communication. That day, I was so desperate to contact the outside world I stole my mom’s phone and hungrily logged onto Facebook. I felt powerless without power. Driving anywhere was out of the question due to the ludicrously long gas lines. People waited several hours for forty dollars’ worth of gas. My parents didn’t want to put up with that, so we had to preserve the gas we had. I started eating candy like crazy, due to the excess amounts lying around from the cancelled Halloween. When we received a call from the mayor stating that Halloween had been moved, I laughed really hard. How do you change the date of Halloween? It’s like having Christmas in January. After seven days without power, I was looking forward to school.

During my whole stretch without power, never once did I think of the people who were really suffering. I'm not talking about the mere inconvenience of having no power, internet, or heating. But the people out there who lost their homes; people who are currently staying at a hotel or a shelter. While I lie cozily in my heated room, some people are sharing cots with their whole families to stay warm. As a teenager, sometimes it’s really easy to see the world from a narrow perspective. I only thought about how the power outage affected me, and not how it affected the community. Ir’s important to see the big picture in every situation. 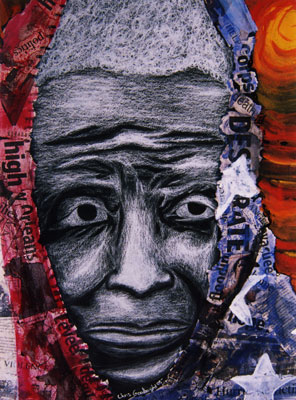