In mathematics, everything has a right answer. If Mary stole two of John’s apples, and he had five to begin with, John could only have three left. However, if you asked a scientist, they’d have to look at the colour, luminosity and density of the apples to guess their type, and even then they could be wrong. A sociologist would look at the environment to tell you what motivated Mary to steal the apples. An environmentalist would examine the effects of the pesticides used in growing the apples, and the subsequent effects of the theft on the surrounding ecosystem. A psychologist would make notes on John and Mary’s childhoods and observe them both before and after the incident to discover how the theft affected the two of them. A journalist would take the story and publish their own version with a sex scandal, a drug element or some sort of comment on politics. An artist would slap some paint around on a canvas in a vague apple-shape and then tell you the piece speaks for itself. A chef would see what Mary did with the apples afterwards before suggesting ten different complex recipes for what she could have done with them. A politician would wonder why she only took two. A philanthropist would say that John should have been happy to share; Mary may have been hungry. And a writer would write 800,000 words about the incident, and then whittle them down to one sentence: Mary stole two apples. 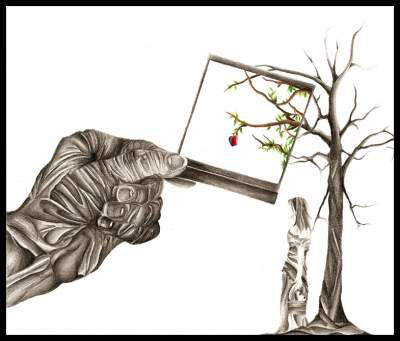