The superiority complex of mankind

It’s a dog’s life or is it? The life of a yorkie, its simplicity is woven with strings that make a complicated connection between the human and canine world. Whatever you want to call our four legged companions, they are possibly one of the most underestimated creatures because although they remain unable to use speech, they have a large portion of the human population wrapped around their paw. But the question is how? I myself have been captivated by my little yorkie Dill, who is charmingly quirky and manages to charm anyone who crosses his path. His lifestyle is one that both fascinates and awes me as I think it may play a large factor as to why it is often the dog that controls the human although we might prefer to believe otherwise.

Dill’s Life rule number 1: never take anything on the first offer. Dill is quite the fickle pooch and like many yorkies he often refuses to eat. Now, Dill knows exactly how to play people; he sniffs his food and if it isn’t to his liking he withholds his appetite until he has received a better offer. The application of this rule can also be used within human society, whether it is to negotiate big business deals or simply to draft a paper. Settling can often be a person’s downfall; in my case it was settling in school, not wanting to change or get better. Eventually, the realization came that by settling I wasn’t allowing myself the challenge I deserved. The same goes for business; if you settle on the first offer you could end up losing a great deal or with writing, if you publish on the first draft, what could have been an excellent writing piece doesn’t live up to it’s full potential. Much like a plate of kibble the first draft is just the precursor to much potential, but only if you let it.

Dill’s rule of life number 2: The world is your oyster, or in this case your toilet. When we were first housebreaking Dill we had trouble communicating to him where we wanted him to go the bathroom, he would just get confused and pee on the golf mats instead of the grass. What we eventually realized was that we weren’t communicating the concept in a way he would have understood. Within this somewhat ridiculous story lies the important lesson of not leaving instructions up for interpretation. Being clear and concise is the key to any successful endeavor; writing instructions for a game or explaining a math equation are both things similar to housebreaking a dog, clarity is the key. Similarly, being on the receiving end of directions it is important to understand that if the instructions aren’t direct, clarify them. Basing actions on loosely interpreted directions can lead to indirect destruction. From grass mat to grass and addition to calculus instructions are key to success.

Dill’s life rule number 3: the puppy dog eyes get you anywhere. Being the 5-pound yorkie that he is, Dill has plenty of pull with people. His giant eyes paired with a faint whine often allow Dill passage into anything he pleases. Ordinarily in the human world we do similar gestures unconsciously. Many people are familiar with using the puppydog eyes on their parents (though it never worked for me…) when trying to convince them, this goes hand in hand with the begging concept for dogs. In fact we took this gesture for dogs and applied it into our own situations.

Although we have many similarities to dogs we also have much to learn from them. The dog not only does everything to keep itself happy but also gives unconditional love to all others. To be both egocentric and selfless is an incredible feat few members of the human race have the ability to accomplish. The animal kingdom’s incredible ability to attain enlightenment humans have yet to ascertain without many of the available technologies expendable to the human race proves them to be inspirational and eye opening. As humans we should consider what defines a superior being and understand it is truly a dog eat dog world. 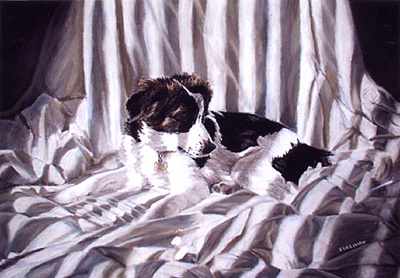 The author's comments:
This piece is inspired by my puppy Dil!!!
Post a comment
Submit your own