Analyzing Classism in "The Stolen Party" Through a Marxist Lens

Favorite Quote:
“Beware; for I am fearless, and therefore powerful.” — Mary Shelley

In “The Stolen Party” by Liliana Hecker, tells the story of the struggle between classes and the difference in social status. The main character, Rosaura, is ecstatic about going to Liliana’s party, even though her mother works as a maid for Liliana’s family.  Rosaura’s mother warns her not to go to the party because she knows that her daughter will not be treated as an equal. Just as her mother suspected, when she arrives at the party, she is immediately treated as the help, rather than a guest as she had hoped. At that moment, Rosaura loses her innocence because she realizes that poor people are viewed as inferior to the rich, proving her mom right. She believes being educated puts her at the same social status but when she goes to the party, she realizes that she is frowned upon for her lack of economic privilege. Rosaura and her mom are the proletariats, while Sefiora Ines and Liliana are the bourgeoisie; Rosaura wants to believe that she can be viewed as the same, but due to society’s superstructure, she can never be equal to Liliana.

When she arrives at the party, Sefiora Ines asks Rosaura to help serve the girls attending the party, which she believes is only because she knows the home best.  When Sefiora Ines hands out the party favors, Rosaura is excited to receive one. Sefiora Ines hands her two bills and says, “you truly earned this… thank you for all your help, my pet.” This is a turning point that makes Rosaura realize that she is nothing more than the help. She becomes oppressed by the ideology that being educated does not put her in the same social class as the aristocracy. When Sefiora Ines calls her “my pet” it highlights that Rosaura is the proletariat, and is recompensed with money, rather than a loot bag because she is not viewed as equal. It displays the harsh reality that the elite can manipulate the poor, as the poor are not able to raise their economic class, as the “system” only allows the rich to become richer. Rosaura comes to the crushing realization that economic class is the core determining factor to an individuals’ “rank” in society, and her “rank” doesn’t afford her a goodie bag. Rosaura’s ideology on social class having to do with being educated results in her false consciousness, as the aristocracy’s intentions are only to promote those in power. Rosaura’s will never have a spot at the party as a true guest, as she is forbidden by society’s superstructure to be viewed as an equal.

Rosaura has not seen enough of the world nor has she had enough interactions to realize that the lower class are just a chord in the whole instrument; they are what makes the Arsitoracy function by serving them. The proletariat lacks the respect they deserve due to their socioeconomic class. Sefiora Ines wouldn’t dare to see Rosaura as one of her daughter’s friends because that would break the fragile balance that holds the society together that puts the rich on a pedestal. Sefiora Ines destroys Rosaura’s illusion that she could escape poverty even though the system is in favor of the rich. 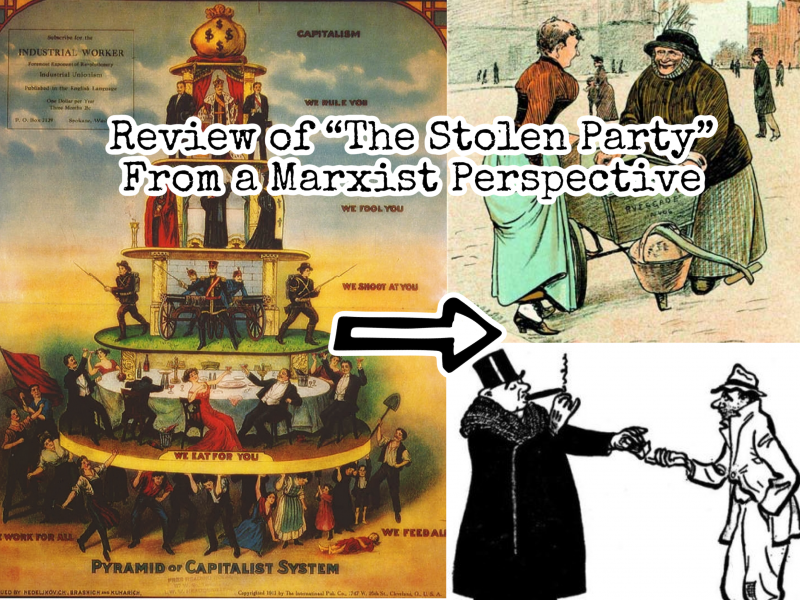 This analysis of "The Stolen Party" highlights the roles of classism, economic rank, and social hierarchy that still play a prevalent role in shaping society