Is CRISPR-Cas9 A Good Idea?

Favorite Quote:
There is only one happiness in life, to love and be loved

Changing someone’s genetics. Making them completely different. Altering your unborn child’s DNA. The CRISPR-Cas9 technique was invented in 2019; deemed a “premature” and “dangerous” method. It was invented to prevent illnesses spread through genetics by using Cas9 and guide RNA to rewrite a portion of DNA. And though it was invented by American biochemist Jennifer Doudna, it is incredibly risky, a very early idea, and it takes away disabilities entirely from people who would have appreciated and learned from otherwise. People aren’t meant to be perfect. Parental selective reproduction is a terrible idea.

The process of gene alteration can be life-threatening. When the Cas9 combines with a guide RNA, there’s a huge risk that some other genes may be accidentally deleted, causing the baby to be born with certain birth defects, and in some cases, cause the child to die. Cardiologist Eric Topol says, “This takes the concerns that have already been expressed about human embryo editing to another level.” More research on a study that uses CRISPR to remove the extra chromosome causing Down syndrome showed extreme danger, and it “further affirms we are not ready, not even close” to try this method, Topol adds. CRISPR-Cas9 has also been studied for removal of the CCR5 gene to prevent HIV, but removal of this gene may make the child more prone to other illnesses, starting with the flu.

Many people think that selective reproduction is safe. They say that it was invented by experts and studied well. However, the reality is that the CRISPR-Cas9 method is a very new idea with little stable research proving it to be effective and no research guaranteeing full safety for patients. In a New York Times interview on October 22, 2020, Jennifer Doudna, one of two scientists responsible for the creation of CRISPRCas9, warned of the unknown dangers of embryo editing, urging people to wait to use CRISPR for these purposes. She begs the question, “just because we can [change genetics], should we?”. The answer is no. Biochemists state that CRISPR fails 15% of the time. That may not seem like a lot to people, but think of this; those who survived CRISPR-Cas9 fails are going to have children with those same defects, and they’ll have their kids, and the numbers will just multiply until we have a whole population of people with CRISPR-failed genetics. According to RSAWA ( Research Safety and Animal Welfare Administration), “ CRISPR/Cas9 technology can induce site specific DNA mutations in human DNA. In addition to cleavage at the specific target site, off-target effects of the CRISPR/Cas9 system have been observed. The cause of these off-target effects is due, in part, to incomplete homologies between gRNA and other regions of the genome.” It might take away excess DNA by mistake, and instead of saving someone the struggle, takes their life away. This clearly shows that CRISPR is not safe; not yet.

Many people say they’re grateful for their flaws. They say they wouldn’t be the person they were without them. Humans aren’t robots. We make mistakes and we learn from our struggles. So why would we try to change someone’s genetics? We are meant to learn from what comes our way. We are born with flaws and disabilities and they are a piece to the puzzle that is our lives. People don’t understand that. They think that we should take away risky genetics from embryos so they can have a more accessible and “happy” life. Dave Finn, a man in a wheelchair, begs to differ, and says he feels “independent and proud of myself.” He has persevered through his disability and plays golf on his computer to fulfill his passion for the sport. People wouldn’t have the experience and wisdom they gained from their flaws if they weren’t there. Nick Vujicic, a man born with no arms and no legs says that “it’s a lie to think that you’re not good enough”. He leads his active life with happiness and gratitude towards what he can experience and what he’s learned along the way. It wasn’t easy for him to deal with his disabilities, and he says that he often was worried about what kind of a father or husband he'd be if he “can’t even hold my wife’s hand.” But he is now thankful for his journey and is happy with how he is.

People are built with their own unique patterns of DNA. They learn from them. Trying to change human embryo genetics not only takes away originality for a person, but may take away their life. Everyday we hear about or hopefully experience gratitude towards our flaws. It is an early idea. We don’t know much about it. So are we really so desperate to change that we take a risk likely to kill someone before they take their first breath of air? The answer should be no. A firm no. So go. Tweet, snap, post, spread the word. Tell people how much of a terrible idea it is. Warn them and inform them. They won’t ever consider parental selective reproduction again. 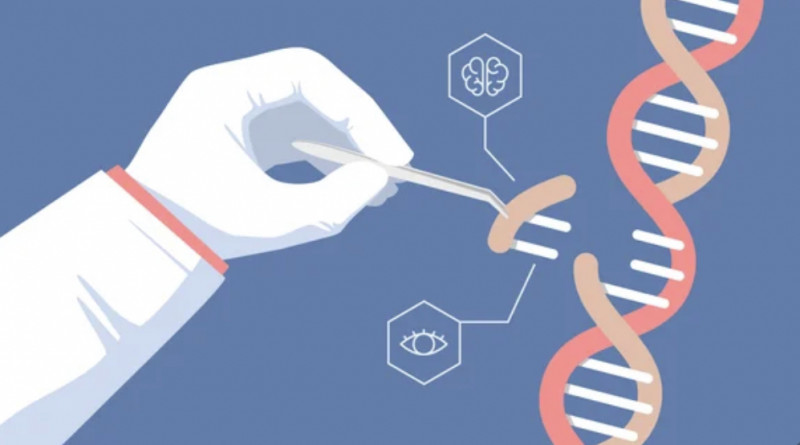 CRISPR-Cas9 is a method used to alter human embryo's genetics. It was created in order to save lives but ending up taking them away. This leads us to wonder, how far are we willing to go?