You're a foot away from a wild polar bear. Your heart pounds; you see your breath mingling with the white breath of the great animal just inches away. The mighty beast has the power to end your life with a swipe of its paw, and yet, it seems so peaceful. So curious. So uninterested in destruction, in ending your life. Its big black eyes stare into yours. Like your breath, your souls mingle, unite.

Suddenly it ends. The polar bear jumps back, away from the window, and you pull back into the safety and comfort of your seat. You, however, are never the same. You will always remember that moment, those seconds of simple beauty.

This was my reality on October 7, 2008, in Churchill, Canada, the polar bear capital of the world. I had gone there to learn about the polar bear, climate change, and have the experiences of a lifetime, but I learned more than I imagined. I went there with a feeling of wanting, wanting to reduce CO2 and help the polar bear, but I returned with a need. The thought of the polar bear becoming ­extinct feels like losing part of my soul.

But that's exactly what's happening: eight of the well-researched 19 polar bear sub-populations are currently in decline, and U.S. Geological Survey scientists estimate that two-thirds of the polar bear population will be gone within the next 40 years. Right now, polar bears, starving because of a decline in the ice masses where they hunt, are cannibalizing their young. Mother bears are losing their cubs to the freezing waters of the Arctic, as their small bodies with less fat build-up simply can't make it back to the shore. I hear the stories daily; more bodies found, more polar bears lost. Is the cub I met that frosty morning still alive? Is his brother, his mom?

Every choice we make in our daily lives – whether to switch off the computer as we run out the door, buy a CFL light bulb for a few extra dollars, and bike to school instead of driving – has an impact on the polar bear in the Arctic. Good or bad, those daily choices are deciding the fate of the polar bear. And it isn't just the polar bear that's at risk. The polar bear is the canary in the coal mine, one of the first animals we will lose, but certainly not the last. Scientists estimate that millions of species will go extinct due to climate change.

It won't only have environmental ­effects either. Public health will ­decline; thousands, possibly millions of people will die as deserts expand, shorelines disappear, and invasive species and diseases enter lands; the price of water could spike to match the cost of oil, reaching $100 a barrel. All of this can be changed, can be stopped, but only if we work together.

“Going green” and “environmentally friendly” are phrases we hear every day, but what do they really mean? Yes, there are small changes we can all make that add up and save ­millions of tons of CO2 from being ­released into the atmosphere. But is that enough? I say no, because I know that with a little effort from each of us, we can make a difference that is even bigger, a difference that can really change the world, save the polar bear, and make the future a bright and ­sustainable place.

As a Chinese proverb says, “The best time to plant a tree was 20 years ago; the second best time is now.” Did you know that if you planted 10 trees today, it would offset your carbon ­release for an entire year? Or that one mature tree releases enough oxygen to sustain two humans? However, we can't just wait 20 years for those trees to mature and start sucking up the CO2 for us. We need to plant those trees and make those changes in our lives today, but there are other things that need to be done to save the polar bear.

We need research and funding for green technology, hydro-power, solar power, wind power, nuclear power, even methane power collection from cows! The solution is in our grasp. We have bright minds, a new generation of unselfish and green thinkers. The president of Polar Bears International, Robert Buchanan, once reiterated, “There are three kinds of people in the world: those who make change happen, those who watch change happen, and those who ask what happened. Be one of those who make change.”

In 10 years you will begin to see the decisions you made take effect. Then, 20 years from now, they will be in full force. And 40 years from now, you will either explain to your grandchildren how we all came together and united as the human race to make the planet a better place and to save the polar bear, or why they have to ration their water, where the great white bear has gone, and why the Statue of Liberty lies underwater, lost. Will you be able to explain why the future is bleak, why we didn't come together in time, why we didn't change the future? Will you have the answer? 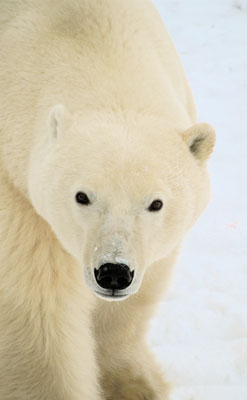 The author's comments:
I visited Churchill Canada, the polar bear capitol of the world, with PBI's leadership camp. I was selected based on my 5 years of volunteer work and my project polar bear, which you can read more about at the following links:

Sad but true we need to help

View profile
yes seriously. good job. i love polar bears and i try to help out with the enviroment that i work in, even though it isn't necessarily helping the polar bear. this a really good article.
Bricheze SILVER said...
on Oct. 28 2010 at 4:06 pm
Bricheze SILVER, Salt Lake City, Utah
8 articles 0 photos 4 comments

Actually polar bears are listed as endangered animals in most parts of the world because of climate change. So in most areas it is illegal to hunt them purely for sport. However, native people are allowed to kill a certain quota for tradition, food, and clothing, and it is nesacerry to kill them for population and physical control (if a polar bear goes into a human populated area, and can not be subdued, they sometimes have to be killed. Most of the time they are tranquilized and moved to a new area though, it is very rare that they are actually shot).

Alex412 BRONZE said...
on Oct. 28 2010 at 12:10 pm
Alex412 BRONZE, Plaquemine, Louisiana
1 article 0 photos 5 comments
View profile
I do not know much about animals, but I do know that people hunt polar bears for their fur. Polar bears are amazing animals. Why would someone want to kill a polar bear? In Alaska, killing polar bears is a sport. Its sort of like hunting, except they kill polar bears instead of deer. Polar bears are about to be extinct, if people do not stop killing the animals; the polar bears will be gone forever!
Binte SILVER said...
on Apr. 8 2010 at 4:41 am
Binte SILVER, -, Other
5 articles 0 photos 33 comments
View profile
good work on this article!
shell11575 said...
on Apr. 7 2010 at 1:20 am
Thats so sad!  What if my grandchildren never get to experience seeing such a wonderful creature, but instead must write an essay about an animal that is extinct.  One never realizes how much we can effect our world with every little thing we do.
enchanted4yu PLATINUM said...
on Apr. 5 2010 at 1:54 pm
enchanted4yu PLATINUM, Calabasas, California
24 articles 0 photos 103 comments

Favorite Quote:
"Don't tell me the sky is the limit when there are footprints on the moon"