Community service issomething not too many people understand. Some think it is a punishment fordelinquents. Well, I am no delinquent, so don't misunderstand me when I say Ichose to serve our global community in Tecate, Baja, Mexico for a week.

Myinitial reason for spending my spring break doing community service was simply tocomplete my required hours for school. It was voluntary, but when I realized Iwould have no real time off for vacation, I started having second thoughts. Iworried I would have an awful time and be homesick. I had been to Mexico before,but never to Baja. I did some research, and what I learned about where I would bespending a week was not too comforting. I asked people who had been there andthey warned me it was a very ugly and dangerous place. They said I would bebetter off not going. I put all that aside, though, and took the little positiveinformation I had and my mother's encouragement and went to sleep the nightbefore the trip.

Guess what? I woke up late and got there just in time tothrow my bags into the trailer and jump in the van. No shower, no rest room andno food. So the trip did not start off on such a good note, but I decided tobrush it off and hope for the best.

The drive took six hours, passingthrough San Diego and Tijuana, Mexico. When I looked out the window for the firsttime in Mexico, my new surroundings captivated me. I took in the smell of Mexicowith such acceptance that it amazed me. The fresh air made me happy to be in sucha beautiful place. As enticing as the area was, though, I also noticed thepoverty. When we arrived at our destination, we set up camp in a matter ofminutes.

The first night took some adjustment because of the temperaturechange. In Phoenix it's always really hot, and now I felt the cold through to mybones. The thought of having to live without heat for a week made me uneasy.Before the first night was over, I woke up six or seven times.

Afterbreakfast we headed to our work area. Our mission: to build houses for twofamilies in two areas of a town near Tecate. We split into groups and startedworking the moment we set up, not stopping until lunch. After that, we workedagain until 3:00 p.m. We met the family, introducing ourselves to Veronica MedinaGuerrero and her two children, Manuel and Lesli. This was the schedule for thenext four days.

The last day was full of mixed emotions and new feelingsabout what I was doing. It was clearly a mitzvah (a good or positive deed inJudaism), and I know I helped a family with a new place to live. The feelingswere amazing because I was also very angry for not being able to help even more.After we said our good-byes and I gave the family a final hug and promised"Te escribiré luego"(I'll write soon), I could see that we didhelp a great deal even though I would have loved to do more. I found myselfsatisfied that the family had a new place to live, and I was part of making theirdream a reality. I will never forget helping little Lesli with her new kite andgetting to know a family that I will keep in contact with. At first the tripseemed very selfish, but by the end, I felt I had really done something to helpothers. 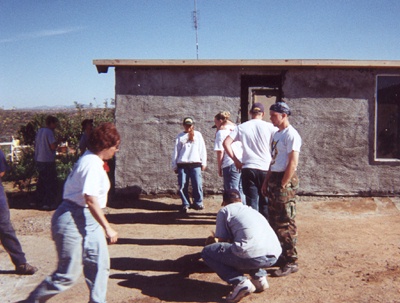