I have had the great and unlikely honor of growing up the only girl in a family offive children.

Being the only girl has many good points. Clothes,toys, games, sports equipment and anything else I could possibly want piled up inmy house Christmas after Christmas and birthday after birthday. I whined andcried until I got my way, throwing fits in stores and causing many embarrassingscenes which worked every time. Any organization or club I wanted to join, I wasin, and those I didn't want to be in, I wasn't. Having to play sports with onlygirls was different for me but it didn't stop me from joining.

I was"Daddy's little girl," his obvious favorite. My brothers despised mefor getting all the new toys and never being blamed when they got hurt or we didsomething wrong.

Never the girly type, I didn't sit home brushing mydolls' hair all day. If I wanted treats, my mother would make them - no need foran "Easy-Bake Oven" for this young female. The only girl among fourbrothers and all their friends every day, playing with a tea set and Barbiedolls? I don't think so. I did what any six-year-old who expected attention woulddo. I became a tomboy with no intention of ever being anything butone.

For the first 12 years of my life I thought of nothing but sports andthe next time I would get outdoors. My brothers and I spent every day with theneighborhood boys. We played football during the day and caught bugs aftersundown. Summer days were spent at creeks catching tadpoles and cooling off aftera long game of home-run derby. I always enjoyed being one of the guys andcouldn't imagine myself any other way. But, my mother could.

One crispNovember morning my mother decided it was time I learned how to be a girl. Thiswas the worst day of my life. I got in the car not knowing where we were going.After a while we stopped at a rest area where my mother did the most dreadfulthing ever - she made me put on a dress. She knew I would never leave the housein one. After ruining dress after dress when I was younger, my mother decided itwould be cheaper to allow me to wear pants every day, which left only specialoccasions for dresses, and then I would usually have a battle wound toounladylike to show. I used all the tricks I knew to fight offdresses.

This time my mother was prepared and in the end, she won. Iwhined and begged: couldn't I at least wear my sneakers? My mother gave merepeated denials and, except for yawning, my mouth was shut the rest of the trip.When we arrived at a big gray building, she walked me inside, signed me in, andleft. Then the torture began. For the next eight weeks these women taught me, anda small group of other girls, "the necessities," as they called them.To me, it was two and a half hours I could have been on the basketball court orplaying football. My first day of these classes was also my first day in dressshoes, and our first lesson was walking the runway. I gave new meaning to theterm "catwalk" as I stumbled and turned my ankles with every step. Atthe end of the runway, I turned to walk back, but I went a little too far andkerplunk - I fell off the edge.

The other sessions went much the same,except for the falling - that was a one-time show. After our last session, I wasmore than ready to go home. When all was said and done, I had learned how tobrush my hair to make it shine just right and how to place my fork on the tablewhile I chewed my food. I knew exactly how to paint my nails oh-so-delicately. Ofcourse, I never used any of these "skills," and soon forgot them. I wasdetermined to stay a tomboy forever.

In high school, I realized that allthe other girls' interests were beginning to be different from mine. I awokefreshman year and the reality of my gender struck me - all my friends were girly,and I wasn't. I painted my face with make-up every morning and got stares from myclassmates when they saw me in a skirt - I had legs. Previously my legs had onlybeen seen in basketball shorts, or when I tore a hole in my jeans.

Whendating became a topic, I knew it wasn't for me. I knew all the things guys did; Iknew what Monday night football was really like, and I knew the thoughts thatwent through a boy's mind. Considering how well I knew them, I wondered how anygirl could hope to find romance in the middle of that smelly bunch. It all seemedlike a waste of time, but I figured someday I might understand.

The onlygirl in a family is overprotected, and so my father controlled practically everyaspect of my life. If I wanted to go anywhere or do anything, my father had toknow the who, what, where, and when, especially if members of the opposite sexwere involved.

The middle of freshman year I decided I would givedating a try. My first date proved quite an experience. My father is a hunter,and so it is normal for him to come into the house dressed in camouflage carryinga shotgun or bow. For my first date, however, this was one scary sight. When a6'4" man filled the doorway, my date saw him as one who was hunting his prey. Theglare my father was giving would have been enough to scare away my date if he'dhad the courage to move. To my father this glare was not enough, the threatening"If-you-touch-my-daughter" speech was needed, too.

Theseexperiences were only the beginning of the rest of my life. I have outgrown mytomboyishness and now see myself as the only daughter, not just one of the guys.I still often take advantage of my situation, using it to get my way. My tacticshave changed, though, from throwing fits to talking calmly, but the results areidentical. My childhood ways still shine on the basketball court or while playingfield hockey, but I haven't caught a bug or bullfrog in years.

My uniqueplace in my family as the one girl among four brothers has been an honor and ablessing. Growing up in this situation, I've had the best of both worlds. 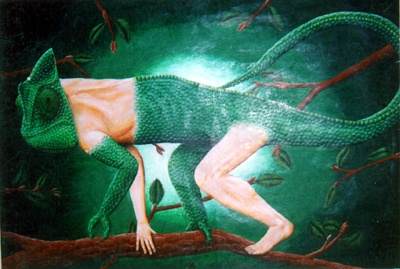