When I was younger and I lived just a few blocks from school, I always walked there. It wasn't very far and to this day, I remember every road I took. One especially stands out in my mind.

It was a long street with a strip of garages, the doors all a rusty red or brown. Except for one: it was blue. Not the shade that brings images of an infant's bedroom, but a bright, dashing blue that called out to every passerby, “See me!”

I did. Passing it every day made it a familiar landmark, and over time a friend. Eventually, I gave it a smile and a silent wave on my daily journey.

I moved away when I was 12 and never returned. I don't know if that garage door is still blue, if anyone else waves at it anymore. What happened to its owner. I wonder what possessed him or her to paint that door blue instead of brown like the rest.

I wonder the same thing whenever I see someone with unearthly pink hair or extra-large tattoos. What makes people want to stand out? Some would say insecurity, that the girl with three nose rings who laughs loudly at everything is really a shaken child inside. But how would they know? Is she really? Or are they just jealous that they never had the kind of courage to be the pink-haired person?

I think a part in all of us wants to paint our doors blue. To make a sixth-grader ­wonder who you are. 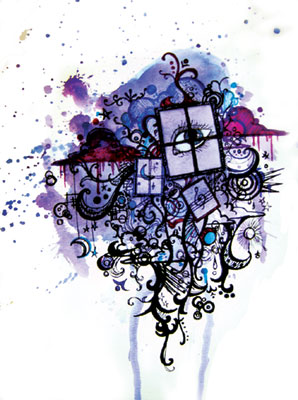 moonshine11 said...
on Jun. 6 2011 at 7:50 pm
This essay was very well written with many analogies that followed your topic. I would have liked for you to include more sensory details and extend the essay itself in order to deepen the understanding of the idea you want to give to your audience.  However, this essay conveyed an excellent idea about standing out. Keep up the good work!!!
zozo1325 said...
on Apr. 24 2011 at 8:09 pm
This is very well writen. I love how you grew off of something most people would deem too simple and, therefore, insignificant and made it into something deep and meaningful. Great work.
gugs29 said...
on Oct. 11 2010 at 9:01 pm
gugs29, Great Falls Va, Virginia
0 articles 0 photos 1 comment
View profile
I read this article a while ago and i cant get it out of my head its very good
sundancer GOLD said...
on Jun. 13 2010 at 12:11 pm
sundancer GOLD, Reston, Virginia
10 articles 0 photos 7 comments

Favorite Quote:
If you only have two loaves of bread, sell one and buy hyacinths to feed your soul.