A Letter to College | Teen Ink

A Letter to College

“In the town where I was born

Lived a man who sailed to sea

And he told us of his life

In the land of submarines”

As a child, all I wished for was to sail the sea of green with The Beatles. To explore, Pepperland, the magical world eighty thousand leagues under the sea, created by soothing melodies and dream-like lyrics. Pepperland was my second home, a perfect place soon to be devastated by a clan of fierce, buffoonish, music-hating creatures called the Blue Meanies.

And, such as what happened to Pepperland happened to me too. The safe haven that protected me from the outside world came crashing down and I was forced to leave due to my own personal Blue Meanies. Once splendid dreams of exploring the sea of dreams faded away, replaced by a distant memory and an inexplicable current reality. One in which I felt hopeless and alone, with nothing to anchor me down. I was adrift at sea.

A mind goes mad from being out of one's comfort zone, and I surely was the maddest hatter. Everything was going topsy turvy, thoughts impending after another, moods changing drastically. All of the certainty of the future plans becoming fulfilled became replaced by uncertainty and desperation. Too many options, too little time, too many unknown outcomes, what choice shall I make. Why am I overwhelmed? And so, I continued to worry, allowing my Blue Meanies to seize control, instead of asking for help.

Who was I when I was not a sea captain, exploring the expansive sea of my mind? Outside of my head, I was a mere individual living in suburbia, attending a high school ruled by Blue Meanies. Dictated by reception, hounded by fixation, and motivated by isolation carried out through each day. Noises were everywhere carrying out through packed classrooms and close-quarters cafeterias. Wanting to cover my ears to deal with the noise, but finding out that there was no end to the sound. For every classmate that I did not know I was lost whether or not they would be rude or nice. The irritation of hearing people eating doubled down into the agonizing earworm that could not get out of my head. To calm myself I read, read in any social situation, read to hope that I could handle the noise. But people only have two hands, and one can only read or eat inconsecutively, there has to be a tradeoff between the two. Reading seemed like a favorable option.

As a result of meddling with the Blue Meanies for many years now, I have adapted to the current situation. Finding ways to deal with the noise, like listening to music during lunchtime. Wanting to let the world burn, create a world of your own, one that you can prosper and control. Feeling afraid, find ways to feel strong by starting each day anew. Being hounded by the Blue Meanies, know your worth, and find your voice through writing. Having the ability to write poems and stories helped me to rekindle my connection with Pepperland--a creativity hotspot--and, a place untouchable by the Blue Meanies. Writing gave me the means necessary to dismantle some of my Blue Meanies, at least the ones in my mind. I hope someday that I can dismantle the Blue Meanies in my life, maybe one day this madness will cease to exist.

At the moment, though, the situation is manageable and that is all that matters. Music and movies helped in other ways to stop thinking about myself and lose myself to the power of storytelling. In these escapes from reality one comes to realize the true purpose of art, that is to be expressive, open, hopeful, to remember the past but not let it weigh you down. Maybe the Blue Meanies can come to this realization too.

“We all live in a yellow submarine 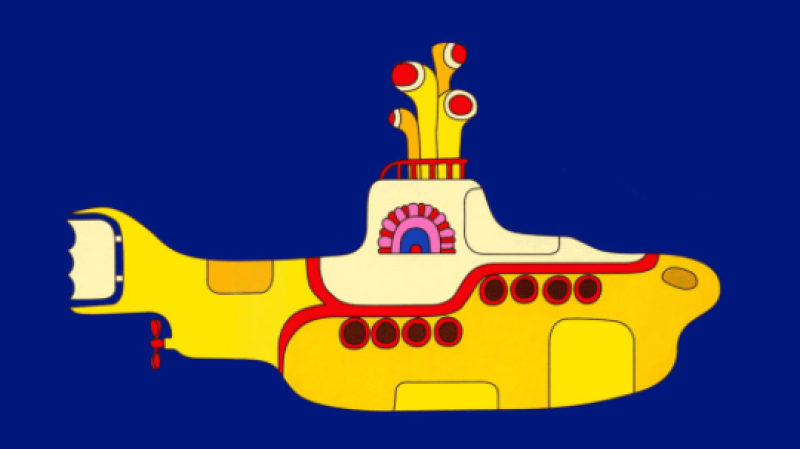