Affirmative action is the policy of favoring minorities who have suffered from discrimination within a culture (Merrian Webster). Colleges partake in this policy because they want their schools to be more diverse. However, in trying to make their school more diverse, colleges will choose minorities over caucasian people who have better grades. The Trump administration is investing affirmative action cases to see if colleges are being “racist” against white people.

The reason why minorities are chosen over caucasian students is because people feel that they are at a disadvantage. There are many factors as to why minority students do not have high achievement in the educational setting. Poverty and parental guidance have a big affect on the education of these minorities. It has been proven that minority children are more likely to come from poverty than caucasian kids. A large portion of minorities often come from bad neighborhoods that have suffered from violence or drug abuse. Many can’t even afford basic needs such as food. A lack of parental support also puts minority students at a disadvantage. Many parents who emigrated from foreign countries do not speak enough English to help their children out with homework or other assignments. Minorities are also more likely to not have a father in the house. This is a problem for 57% of African Americans. Black males are more likely to drop out of school due to the absence of their fathers. People who do drop out of school might go down the wrong path and become exposed to drugs, pregnancy, and gang violence. Because of this, college's want to help them out by considering them over caucasians.

Laws were written to protect minorities because data showed that society has privileged whites over minorities. However, there have been many instances where white people have not been accepted into a school because they were not a minority. Abigail fisher is a white woman who was denied admission to the University of Texas. She claims that if it wasn’t for the school’s affirmative action policy, she would have been accepted. Unfortunately, her claim was rejected by the supreme court.


What colleges have to realize is that it is unjust to pick and choose people depending on their race. Every life matters, no matter a person’s skin color. Colleges should only focus on who has better grades and is more qualified for the school. White people and minorities are no different from one another. They both are given the same opportunity to be successful. White people shouldn’t be punished because of their nationality. They cannot change who they are, no matter how hard they try. The government needs to help these run down neighborhoods that are harboring these minorities. If our country can get people off the streets and into schools, it will help these communities greatly.

The government should be focusing on rebuilding these run down neighborhoods. They need to focus on helping families and giving people access to basic needs such as food and education. It is not morally right to punish white children just because they are the majority. They cannot control who they are. Minorities already have it tough, so we should not make it worse for white people. Our nation needs to help minorities so that caucasians do not have such an advantage over them. If the United States can succeed in doing so, society will prosper. 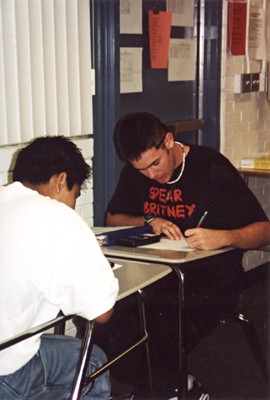 Hope you find it interesting!

ApplePayy said...
on Dec. 6 2017 at 5:10 pm
I disagree with the sentiment behind your essay. White people certainly aren’t being punished, I’d say disadvantaged. More importantly though, the solutions you offered would be less effective and more “unfair” than affirmative action.(Also you may not want to refer to whiteness as a nationality.) However, I do agree that it’s fundamentally immoral for colleges to base policy off of a racial trend (as not all racial minorities are underprivileged and not all white people are well-off).