Education for the Homeless Children of LA | Teen Ink

Education for the Homeless Children of LA

In a study done by the LA county, in the year 2018 the homeless student population shot up 17 percent compared to the year before. These homeless students not only lack a roof but also lack an education. Although some people misinterpret the meaning of homelessness since some homeless people may not be the same ones we see on the side of the roads, many homeless children lack education because of economic and financial reasons.

Before many of the students become homeless their needs to be a cause and one of the main causes of homelessness for students and their families is because of economic reasons such as Low pay and the distance from their school and where they stay. Many homeless people can’t get jobs since there are limited amount of jobs available and because many may not be qualified.

Even if they do manage to get a job it is low paying and are all spent on living expenses. Research shows that an average Californian needs to make about 75,000 dollars annually in order to live in California i. Especially here in California, where the living expenses are high it is very hard to make a living.

Being homeless and with little to none pay the stress and the worries causes the student to perform not as well as the other students. A study done in the LAUSD area shows that students are twice as likely to score lower on standardized test compared to other and because of that eight times more likely to repeat a grade ii. Students are not able to concentrate because they have way bigger things to worry about such as, if they will have enough food for the night or if they even have a place to stay. A study also shows that 23 percent of homeless students miss 10 percent of school iii. With all time they need to earn money or to scavenge for food they don’t have enough time to even go to school.

To help the homeless people McKinney-Vento Act passed in 1987 insures to fund federal money to programs that provide homeless shelters iv. Although, the term homeless defined by the federal government says people who lack a night time residence. This is misinterpreted by the government since if they have a roof above them, they are not considered homeless. For example, they could be living in a homeless shelter and wouldn’t be considered “homeless”. This controversy has led to some homeless people to not get government funds and is a huge problem.

To these hardships that these homeless people face in Los Angles many programs take action. A bond voted in by the Los Angeles Unified School District allows the use of district property to tutor homeless students and to house their families v. They allow overnight parking for people who have cars and free meals for the families. Not only that, some programs have councilors and free tutors that go around the Los Angeles area and meet with homeless children one on one. By doing so this helps homeless students who don’t get enough time to study to receive extra help on homework and school materials. 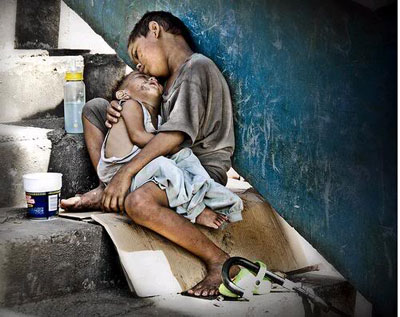