All time is borrowed time and eventually we have to give it back, but unless we make the most of the time that has been granted, what can be attained will become unattainable. John Tyree and Savannah Lynn Curtis knew all to well about effects of time and how it can either build upon something so beautiful, or destroy it with her hardhearted, dire hate. Nicholas Sparks, a chef in the kitchen, was preparing a grand dish. He formulated the dish with such precision such…care; he came to call it Dear John. In this gripping novel, soldier John Tyree must choose between his country and the woman who captured his heart like a sunset in a Polaroid, forever still…paralyzed, the only thing time wouldn’t change.

John and Savannah’s love was a tall willow tree; her leaves billowing in the soft breeze. There would be a thunderstorm once in a while, but she would still be erect. It was only until several years anon did a bull dozer scythe the beauty and its spirits; their memories drifted in the air. The air we breathe, drink, exhale, puff, blow, and wheeze. The two main characters John Tyree and Savannah Lynn Curtis were destined for failure from the start; John was a soldier who re-enlisted for the army after 9/11 and Savannah was a college student with a life of her own, in which the sands of time would not stop because she fell in love. There where three parts to John and Savannah’s love story, the beginning, the middle, and the end. In Part I, their worlds violently collided. Savannah’s bag had fallen into the ocean and John retrieved it from the depths, this action set a sequence of events in motion. The two quickly fell in love and felt that marriage was something they saw in the future. Time however ran out for the both of them it was time for John to fly back toward Germany to finish his tour of duty. In Part II, John comes back home but feels that his woman has changed and they find themselves arguing much more. One argument ends in sex and John sadly fears that they made love only to save their relationship and not for the sole purpose of being madly in love. A few weeks after John returned to Germany 9/11 took place in NYC and he has to make a life changing verdict.

Dear John receives four out of five stars only because I wish to change the ending. My favorite part was the entire first. At that time the two weren’t concerned about their surroundings, the world seemed distant, an inferior. But reality, the quality or state of being real, sunk in as did their love. John and Savannah were settled down …gradually sinking. My least favorite part was the end of Part III, trust me, it will be yours too.
Nicholas Sparks did a job well done with a few kinks here and there. This book did not move me to tears but it did cause me to release profanities at a certain backstabbing character in the novel. Dear John had a beautiful beginning, it was quick but insightful and romantic; however I found myself skipping pages filled with off-topic, irrelevant stories of ineffectual, unenthusiastic, commonplace lexis in Parts II and III and the Epilogue. 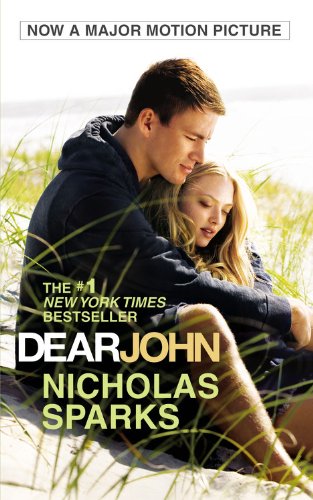 
Buy from Amazon
The author's comments:
I didn't really hate the book, I just found myself skipping parts which I...never do. The movie was more...interesting. Sorry.
Post a comment
Submit your own

View profile
i'm sorry, but your review left me lost and confused with all the metaphors and stuff.
amandap PLATINUM said...
on Aug. 19 2010 at 7:00 pm
amandap PLATINUM, Midlothian, Virginia
31 articles 0 photos 183 comments
View profile
very great review! you really got it well, I enjoyed reading this, even though I really didn't like this movie.