“Hello, welcome to ‘Anna’s Coffee Place’, what can I get for you today?” The fabricated excitement in the young man’s voice could be heard from miles away. And although she understood that he had probably been working since the shop’s early morning opening, she wished for a second to see what he would be like when genuinely thrilled. Would his small, round dimples become more noticable? Would his pearly white teeth shine through his parted lips in an uncontainable smile? Would his dark brown eyes sparkle as they shrink into small crescents with the rise of his tan cheeks?


Juno understood that she had been taking much too long to be considered normal in responding to the attractive barista that stood in front of her thus she racked her brain quickly for an answer, not wanting to come off as an awkward introvert, although this could describe her quite accurately. “How about your phone number?”


At the sudden surge of boldness, the girl’s cheeks immediately flared up in a red color as her eyes widened and her lips parted slightly in surprise at her own words. The boy had a similar reaction as his cheeks seemed to be redder than before, although he found the response to be much more amusing as he chuckled lightly behind his raised hand - his broad smile much more genuine than the earlier introductory one, Juno noticed.


“I appreciate the straightforwardness but if you really don’t have anything to order from the real menu-” his soft, now much more shy voice was interrupted by Juno’s frantic attempt at fixing the situation she had caused.


“No I do!” her loud cry made her internally wince, sorry to the fine young male in front of her that had to deal with this, “Oh gosh, I can’t believe that came out. I’m so sorry.” Juno looked down in shame as she realized the graveness of the situation. Quickly looking for a way to fix it, she looked back up at the now awaiting barista and recited what she had originally planned in a softer more controlled tone as to not startle the other further, “Can you recommend me something good? Preferably coffee-related.” Her second statement sounded more like a question and she internally scolded herself for her lack of confidence in conversing with the handsome fellow in front of her.


“Well if you’re into strong coffee, the dark roast here is amazing, but if you want something sweeter, a latte is always the way to go for me.” His voice, in contrast to Juno’s, was light and casual, filled to the brim with confidence. He smiled reassuringly as if he could see Juno’s inner struggle, not wanting to embarrass herself further, which only made things worse as her writer-mindset immediately sped off, waxing poetic about his now visible dimples.


“A latte sounds nice then, I like sweet things.” Juno used her best ‘I’m-not-a-crazy-person-I’m-just-an-awkward-child’ smile and pushed a stray strand of blonde hair behind her ear, in an attempt to act coy, although she felt this was probably not at all attractive from an outsider’s perspective.


The male barista shyly nodded before placing the order into the machine in front of him and announcing her total. As the transaction came to an end, the young man grinned, his dimples lightly visible; he held a transparent cup in his left hand and a black marker on the other,  “And your name?”


And Juno has never considered herself an expert on the wooing slash seducing of others, her flirting skills rarely being put to use, especially with those as attractive as this young man, but as she was handed her drink at the pick up station by another barista she noticed the small text written in messy handwriting underneath her name. 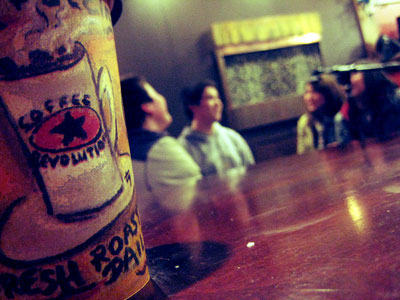