Call of duty is said to be one of the best video game series ever. It all started a couple years when Infinity Ward helped produce call of duty: modern warfare. This game had it all, present day weapons like the .50 cal, p90, and the one everybody knows the AK47. This is only one feature this game has. It also has air strike, UAV, and a helicopter. This was a great game but after a year of this game some people were getting bored so activation made call of duty: world at war. This game wasn’t much, the theme was World War II and the only feature that everybody liked was Nazi zombies. This adds on was a territory defense type game, you would have four or five people in a room fighting off half dead Nazis that are trying to break in through the windows.

So these two games were all right but lets get to what everybody wants to hear, call of duty: modern warfare 2. This is the game everybody was waiting for; infinity ward was out for a couple years…… so where did they go and what did they do? Well they went to work and the worked their butts off, they were working on the world’s best game ever, but how did it turn out? Lets just say they did it, but they didn’t just make it… some say they may have over did it. But who’s complaining? I know I’m not, I am what you would call an x box live addict, I wouldn’t say I “pwn” everybody but I am not the worst there is, I am what you would call average.

Okay so you know a little about me and the games before this one so let’s talk about it. So when you first play it there is nothing fancy about it, you come to a screen with three options. If you play campaign mode it is pretty fun but what almost everybody got the game for was the online game modes that include Free-For-All, Search & Destroy, Demolition, Sabotage, Domination, Team Deathmatch, and Capture the Flag. Modern Warfare 2 also has some new features. Some are new weapons, equipment, and perks that upgrade to "pro versions" if you complete the tasks for them. 15 different kill streak rewards can be unlocked. With all these new features you can receive a supply drop after making four kills in a row, choose who to kill with a Predator missile after five kills, and call in an AC-130 gunship from the sky after 11 kills. Players can also call in a tactical nuke if they get a 25 kill streak. The nuke will blow up the whole map and give an automatic victory for the player or team that called in the nuke even if the team was winning or losing at the time the nuke was called in.
Another new and amazing feature is the in-game host migration. If a match host leaves the game, or if the host has a bad connection, a “host migration” allows a new host to be selected and the game to continue. There is also the addition of a third person mode which can be used in some game types. Well this is only the tip of the iceberg and I hope you go out and buy this game. If you do buy it get it for x box 360 and get live and add me, Megfarms88. 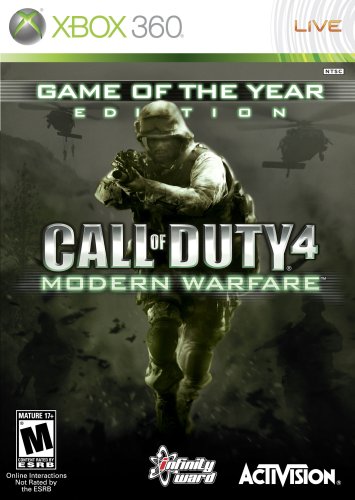 
Buy from Amazon
The author's comments:
i chose this topic because it is a great game
Post a comment
Submit your own

i murder people at all these games