Imagine if you could go anywhere in the universe at any time. You could back to ancient Greece; you could go to the future of some alien. For The Doctor, this isn’t some dream, this reality.

The Doctor, as he calls himself, is a Time Lord, the last of Time Lords, and he has a time machine that can take him to almost any time any place in the universe. The Time Lords died in a massive war with a race known as the Daleks, who are now also extinct. The Doctor cannot go back to the war, as there are laws to time travel. He usually travels with a companion.

The Doctor is played by David Tennant, who plays The Doctor’s personality wonderfully. The director is Coolin Teague, and the producer is Phil Colinson. The Mill, the company that does the visual effects, does an amazing job, because while this show is filled with special effects, they don’t go overboard, but they hardly leave anything out. The Doctor’s most famous companion, Rose Tyler, is played by Billie Piper.

This has everything a Sci-Fi TV Show should have. Time machines, space ships, lost civilizations, aliens, mystery, and comedy (All shows need a little comedy.) As I said before, the special effects are amazing, the graphics are well done, and very little looks fake. All the episodes are well laid out, and they are fairly easy to follow. If you haven’t seen some of the previous episodes, parts can be a little confusing, but there’s usually an explanation not far behind.

Doctor Who is an amazing show. The Doctor’s views on humans will often draw a chuckle. I highly recommend any Sci-Fi to watch this show, you won’t be disappointed. 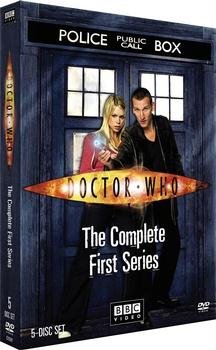 Favorite Quote:
The stories we love best do live in us forever.

View profile
Doctor Who actually turned me on to Sci-Fi instead of me being into Sci-Fi and watching it. There seemed to be signs all over for me to watch the show just like the Bad Wolf signs. I watched a few episodes and I was hooked. I agree that David Tennant is amazing. I do love Matt Smith as well but I think Tennant stands as my favorite Doctor (with Rose as his companion). I agree with pretty much everything you said pertaining to the effects and episodes. It's a beautifully done show.
Enforcer BRONZE said...
on Dec. 2 2010 at 10:05 am
Enforcer BRONZE, North Adams, Massachusetts
3 articles 12 photos 15 comments

View profile
David Tennant was awesome, I think he's probably in my top 5 favorite Doctors. I also wish Eccelston could have stayed longer, he was also cool.
VampireX GOLD said...
on Dec. 2 2010 at 7:44 am
VampireX GOLD, Spotsylvania, Virginia
18 articles 0 photos 81 comments
View profile
That was a funny quote, but David Tennat takes the cake in my opinion.
Nuclearnerd BRONZE said...
on Sep. 29 2010 at 11:17 am
Nuclearnerd BRONZE, North Adams, Massachusetts
4 articles 6 photos 26 comments

Don't believe me? Take this quote for example: first, character from the show, River Song asks him "What in the name of sanity do you have on your head?" Doctor replies with "It's a fez. I wear fezzes now, fezzes a cool!" LoL! See what I mean?

Favorite Quote:
Facts may be true, but there are very few people who dare to speak the truth.