Favorite Quote:
"Creativity is how you tell everything you don't want to say to everyone"
-Me

“Skin” is the hidden gem of dramatic movies. Its emotional execution of a complex difference of skin colors from parents and their children in South Africa’s era of segregation. When the Laings, white, give birth to a child of a completely different complexion, they try their hardest to give her a normal life. Sandra goes through many hard times in her life. Her parents send her to an all white school where she is not accepted by everybody else because of her skin. Dealing with the same dramas as every other teenager, Sandra also deals with not being accepted by her own father, who decides to classify her as white. When she meets one of the natives that sells vegetables to her father, she falls in love, and decides to get reclassified as black to be able to stay with him. Her father doesn’t accept the fact that she betrayed him, and banishes her from their home. Lost and confused, Sandra continues her journey into the segregated world of South Africa only to endure more confusion and sadness. “Skin” is a very emotional movie that I first discovered on Netflix. Sophie Okonedo plays the troubled Sandra effortlessly. I would certainly recommend this movie to anyone who appreciates drama, good acting, and a great ending. You’ll have to find out the ending for yourself. I give “Skin” 5 out of 5 stars. 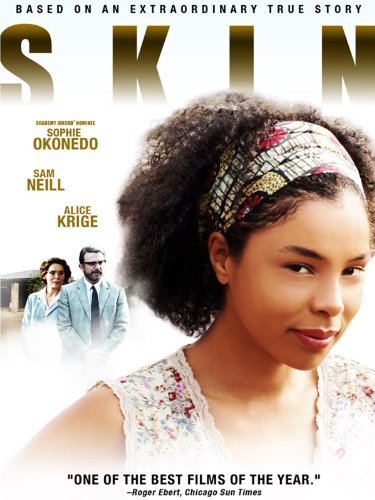 View profile
I remember this movie...no one believed her when she said she was white---she even had complications because her birth certificate said white. This movie addresses a true experience of what it feels like to be judged by the color of your skin. Thanks for writing this review~